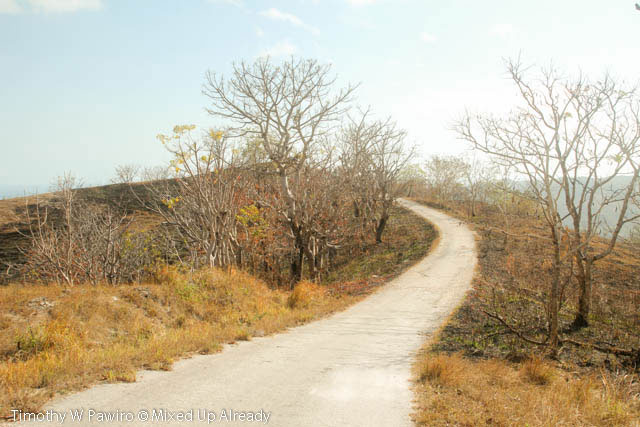 When we visited Tarimbang, we stayed at Peter’s Magic Paradise, which is located above the hill far from the beach. Nonetheless we got a beautiful view of Tarimbang Bay from the that place. There were two or more method on how to get to the beach from Peter’s, either by the shuttle or on foot. As on the first day we arrived at Peter’s on the afternoon, and we, myself and Halim, did not have anything to do, so we decided to go to the beach … on foot. Well, Peter’s staff already said that it was going to be a long walk from up here to down there, but anyway … We took that risk lol. 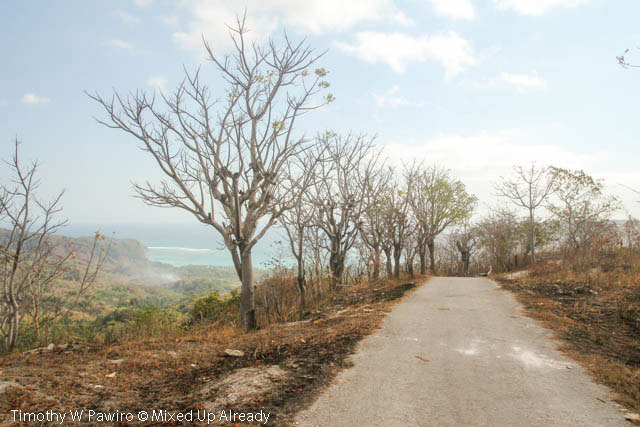 From Peter’s place, Tarimbang bay looks so near, so we started to walk … with a smile. We just walked following the road … It would be nice if the road was built on a straight line, but there is no way to cut the trees there and made the road straight to the beach lol. At some point, we could see the bay, closer and closer and closer, but still … the road still went right-left and down. After some time, it would be great if we could just roll to the beach!

We were still not there yet after 30 – 45 minutes, then we were wondering … It was easy to walk down the hill … But how about going back up to the hills??? Lol …

We chose not to think about it, and continue to walk … then get bored … then we gossiping. Lol … 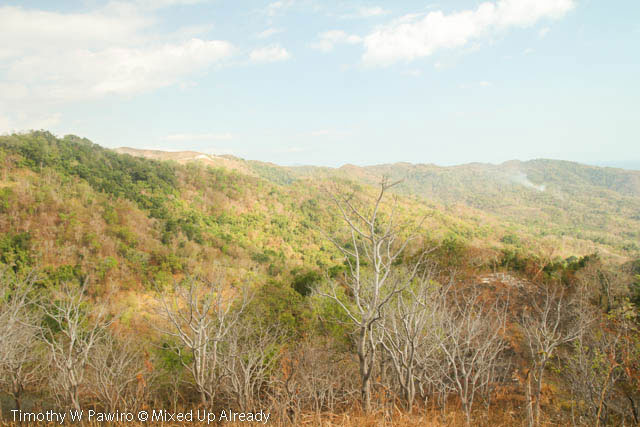 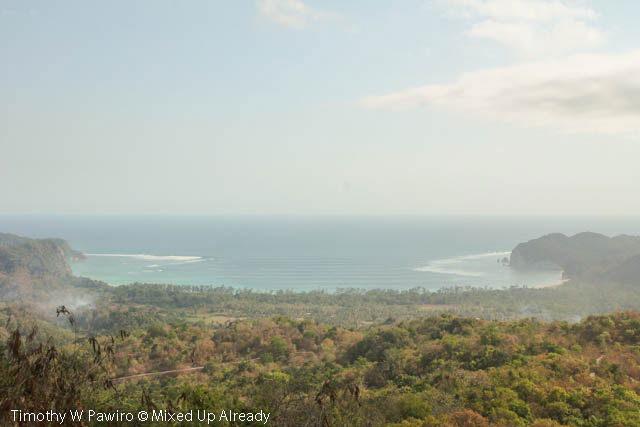 Are we getting closer to the beach?!?! [Tarimbang – Indonesia] 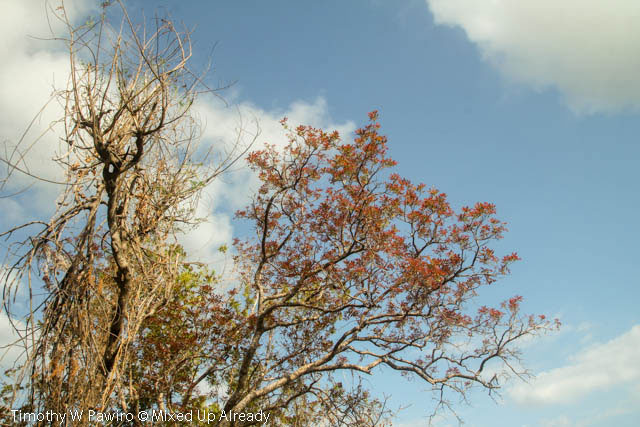 Luckily it was bright and sunny day [Tarimbang – Indonesia] 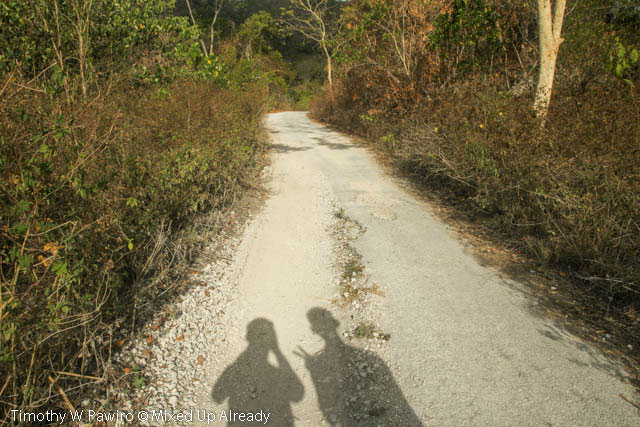 When we were bored! Lol [Tarimbang – Indonesia]

If I am not mistaken, there was no one there, or perhaps there was one or two people riding a motor bike during our walk to the beach (I did not remember), and that was about it. It was a quiet road with no light.

Then we were wondering again … It would be dark during the night, so we needed to go back before the evening. We did not even bring any flashlights *sigh* 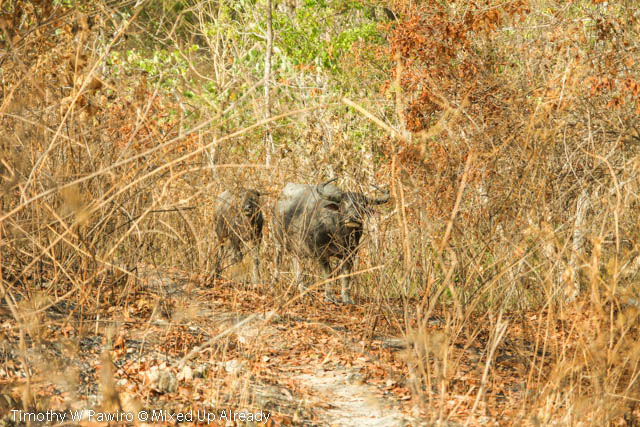 We met this buffalo family along the way [Tarimbang – Indonesia] 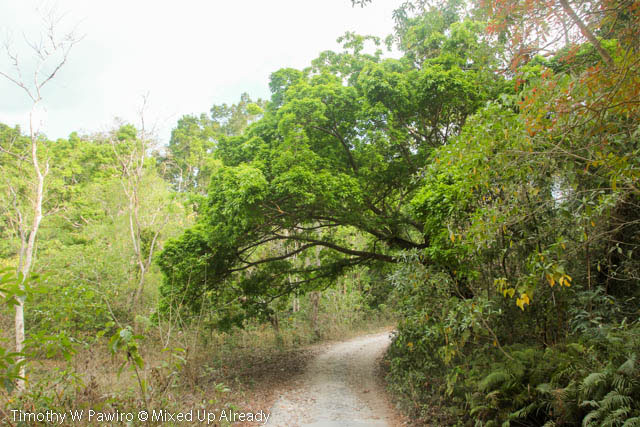 Imagine walking in the evening with no light [Tarimbang – Indonesia]

Finally after a while … We saw a house.

We also thought that it should be close to the beach as the road was flat. We did not rush going to the beach, but we just took our time by taking some photos! Halim was happy as he saw some horses were eating on the field not far from the first house …

There were not much houses in the area. Only a few plus there was a Christian church in the area. 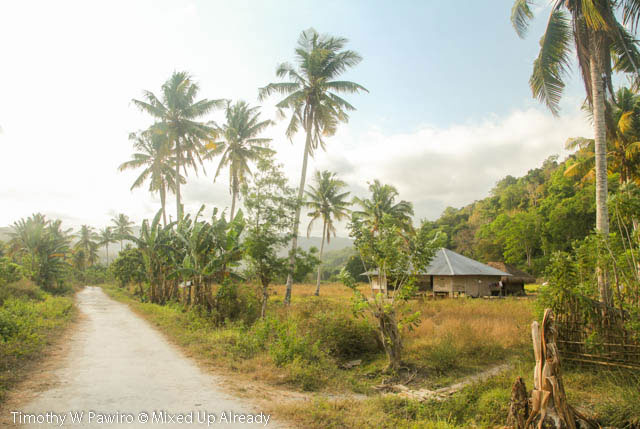 The first house that we saw after a long walk! [Tarimbang – Indonesia] 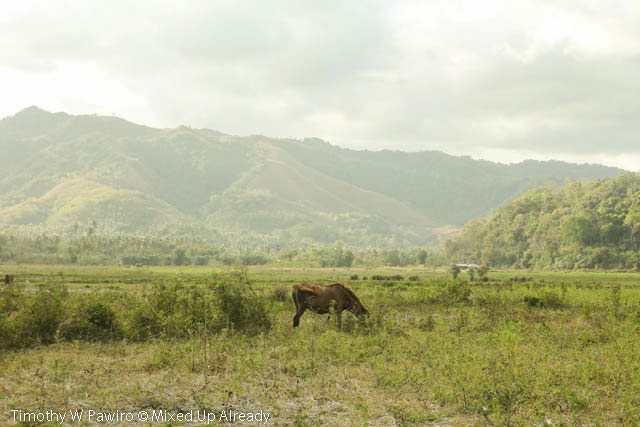 Halim would love to take photo of horse when we were in Sumba! Lol [Tarimbang – Indonesia] 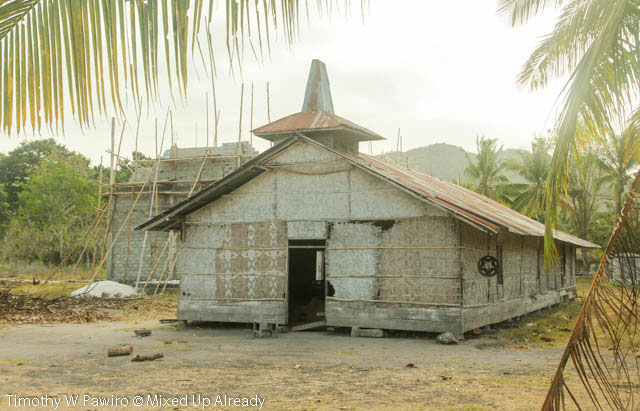 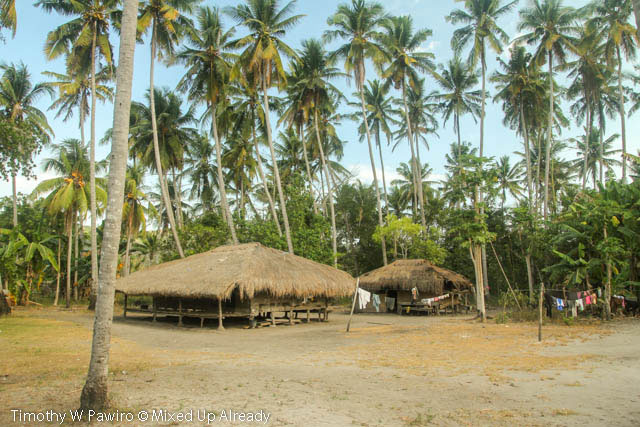 Another house in the village [Tarimbang – Indonesia]

I do not think that there was any directions to the beach, and luckily there was only one road at that time. At first we thought, the beach located close to the village, but apparently not. We needed to walk more and more. The road did not lead to the beach directly, and between us and the beach, there were bush and trees. We just walked until we were pretty sure that we were already ‘besides’ the beach, then we just turned left and walked among the trees until we found the beach! 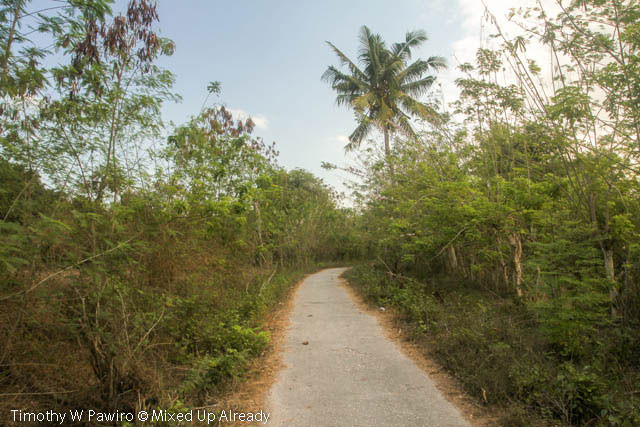 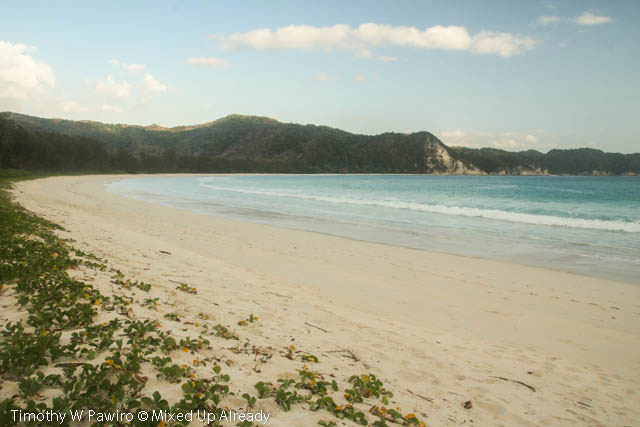 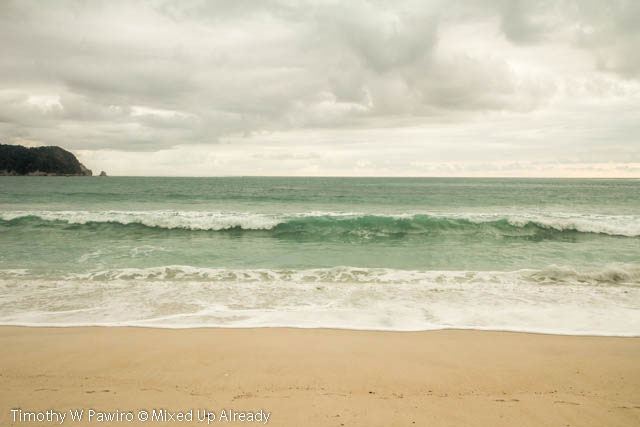 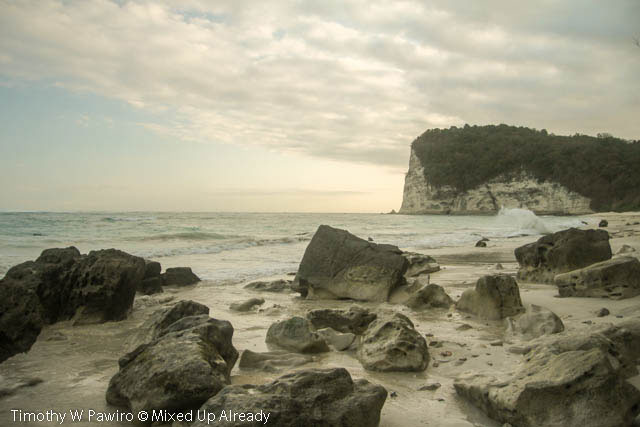 Whoaa … It felt sooooo goood that we were finally reached the beach!

It seemed the walk took so many hours, but after I looked again at the time of the photos; it actually only took about 1.5 hours to walk down!

We did not see many people there, only some foreigner and also some small and simple accommodation besides the beach with Australian flag. Looking from a far … It looks like the place is so nice, as it located just in front of the beach! 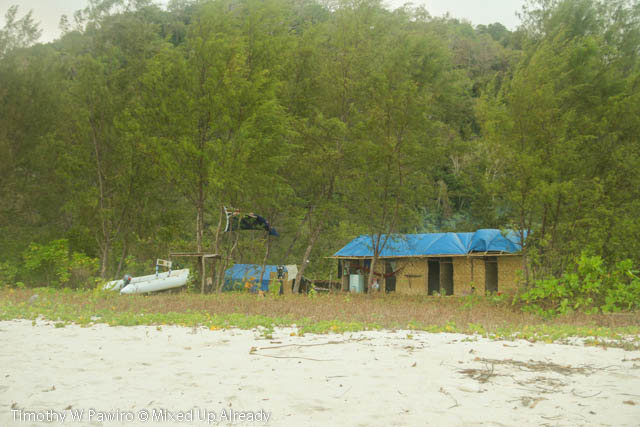 Very simple accommodation but it has a good view of the beach! [Tarimbang – Indonesia] 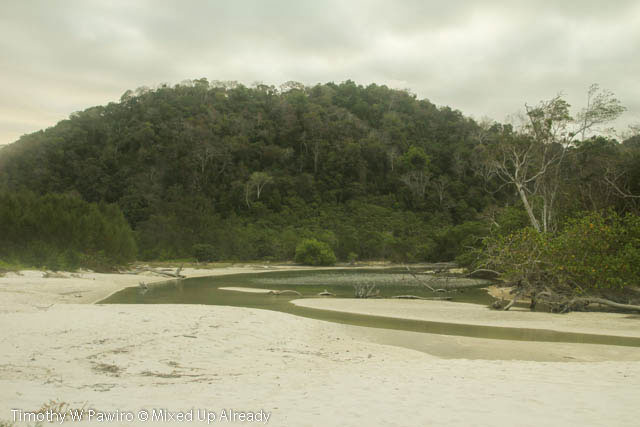 The river that flowed to the sea [Tarimbang – Indonesia] 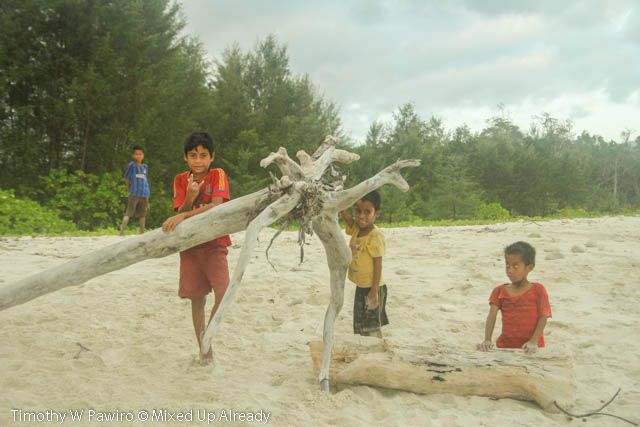 Kids that we met on the beach [Tarimbang – Indonesia]

We did not explore the beach much, as we should get going, and I believed that Sinthya would be interested to visit this beach too! ~~ but of course, we had to use the shuttle! 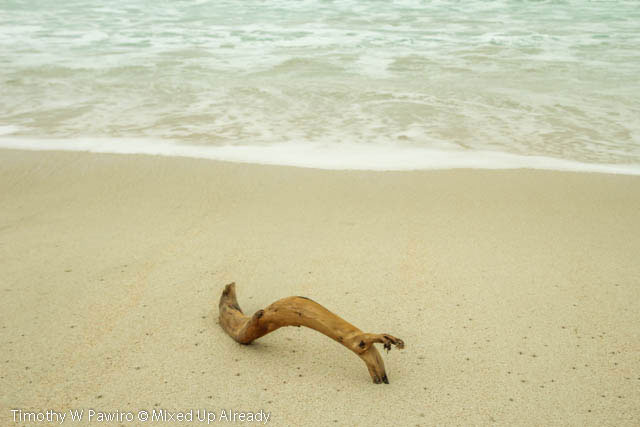 A dead brach on the beach [Tarimbang – Indonesia]

« An escape at Peter’s Magic Paradise