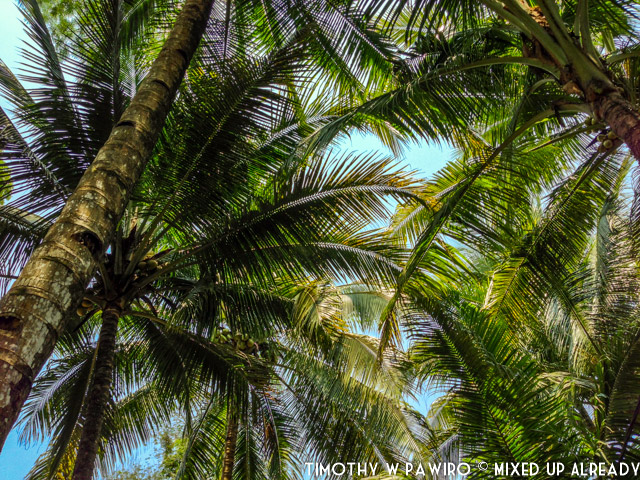 A trip to Batukaras area in Pangandaran [West Java – Indonesia] is a weekend getaway for myself and friends. As our group consisted of four persons, I searched for a place to stay that can accommodate four of us in one place. Then I bumped into a property of one small house through airbnb, called ‘Rumah Raia’, and decided to book for it. This was the first time I was using airbnb service.

There were some reasons why I booked this house. First, the house has 3 separate rooms: 1 x master bedroom, and 2 x common rooms. Second, I truly love the design of the house – simple but yet unique, where the bamboo element becomes the majority of the design. Also, I have seen some people posted in Twitter about their stay in this house some time ago, so I think I made a good choice. 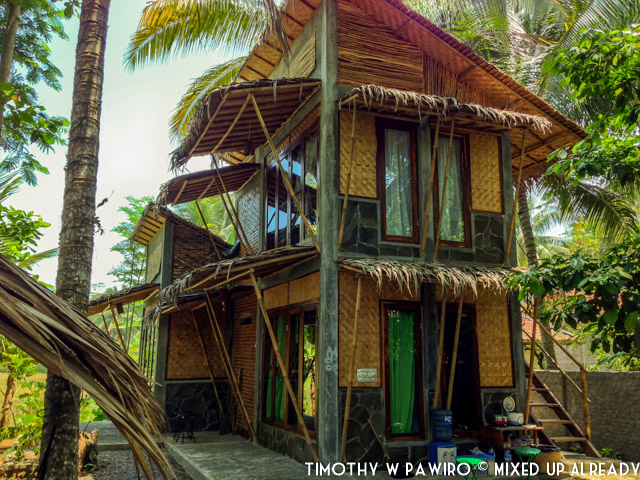 Looking for Rumah Raia location, probably is a difficult thing to do, as it’s not a hotel / resort that can be easily spotted or have some directions to the place, also the house is not located beside the main street. Local people also didn’t really know what / where is ‘Rumah Raia’

Based on the direction from the owner, Ms. Amalia; once we are in Batukaras, we should find the fish market near the beach. Then look for The Reef Hotel. From here, we should enter a small alley [the alley can fit for one car] just beside The Reef Hotel, then walk inside a fishermen village. It’s a short walk between some people’s houses and coconut trees, then we saw the house that looks just like in the photo ;-). 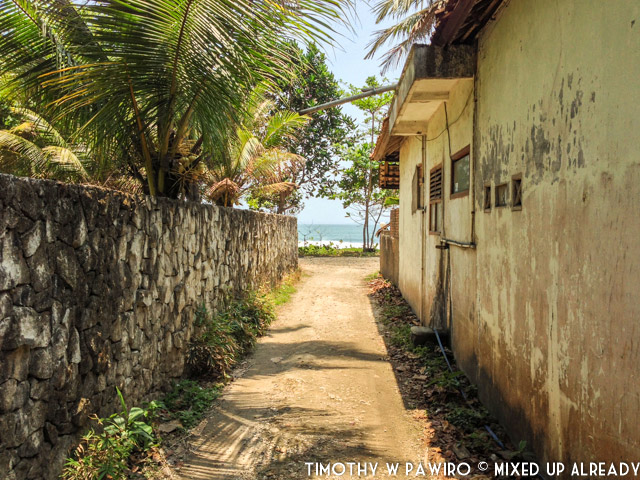 From the alley [the entrance to Rumah Raia] beside The Reef Hotel, we could already see the beach … So yes, it’s a walking distance [Batukaras – Indonesia]

It’s a very lovely small two-story house in a quite big area, where there is still a paddy field behind the house. The unique thing about the house that it’s only uses several bamboos as the gate. Apparently the bamboos are only a temporary gate – but actually it looks quite cool! 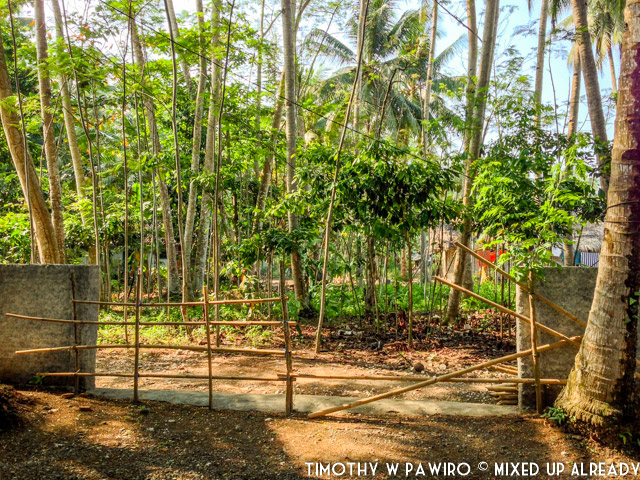 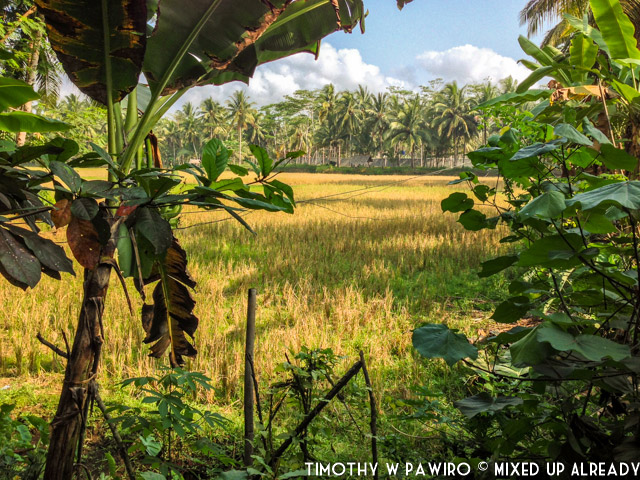 Beside the main house, there’s a small semi-open-air hut beside it. There’s nothing inside it, but then Mas Ondi, the caretaker of the house, put two hammocks beneath the roof of the hut. Nice! 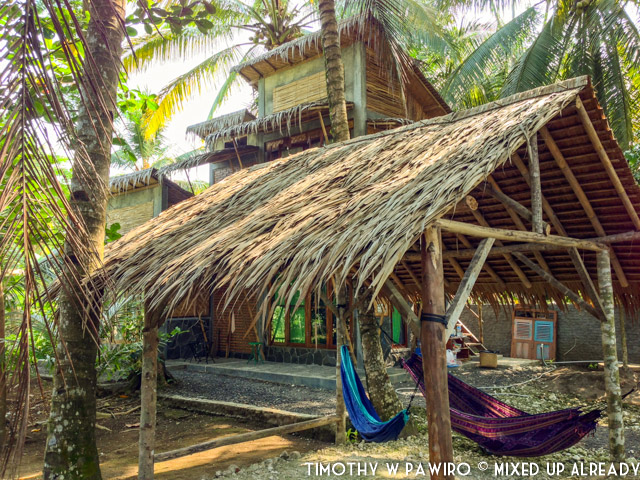 The small house actually doesn’t have any other rooms beside the bed/bathrooms. The 2 x common rooms located downstairs with a share bathroom, while the master bedroom is on the second floor with bathroom inside. No aircon installed inside the room [but there’s a fan in one of the common room for air circulation], and surprisingly the weather was quite cool! Each beds are equipped with mosquito nets, so it’s very useful if you forgot to bring mosquito repellent! 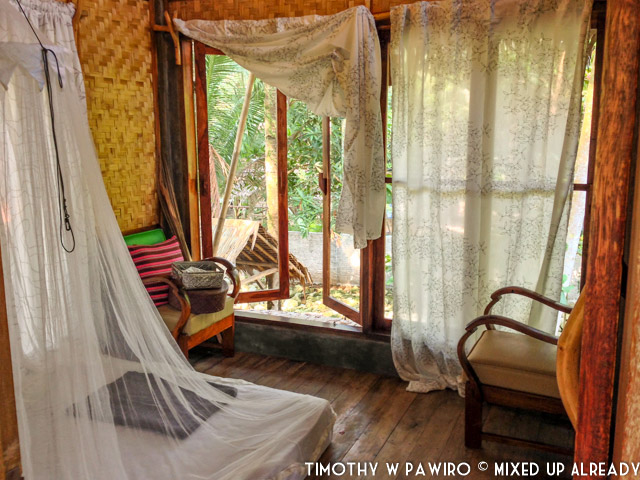 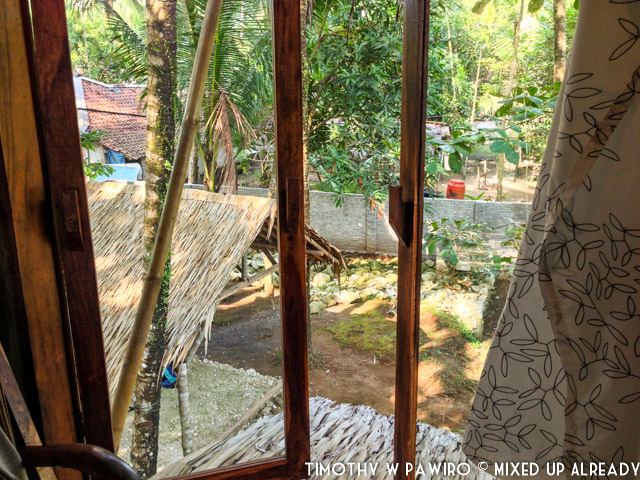 The view from the master bedroom in Rumah Raia [Batukaras – Indonesia]

The house has a small kitchen with some cooking utensils, including several plates, bowls, fork, and spoons. It also has a 3KG gas canister. So for a person who loves to cook [poke my friend, Eko], all the basics are available. Even Mas Ondi has prepared for our BBQ night in one of the corners of the house. He used some wood for the fire, and a branch of tree that has been cut at the centre to hold the fish. 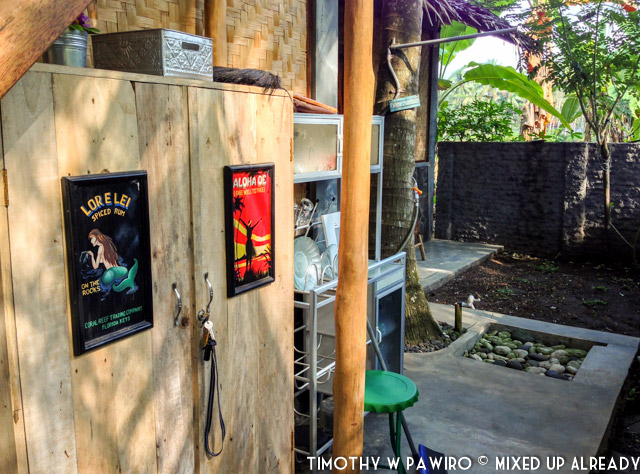 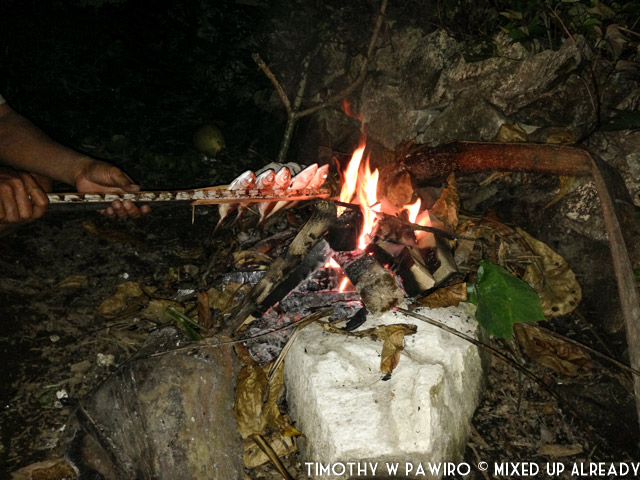 It’s a really nice stay in the house, and it’s pretty sad to leave the house so soon – we only stayed there for one night. The area is quite peaceful too as it’s not beside the main street. Although it’s not located in front of the beach, do not worry at all as the distance to the beach is only a short walk 😉

Rumah Raia can be booked through airbnb.

Register an account at airbnb [ link >> www.airbnb.co.id/c/twirjopawiro ] to get $25 credit voucher by redeeming the voucher using this code: twirjopawiro

PS: All photos are taken using just my iPhone 5, except the group photo 😉

Happy face after the stay in Rumah Raia – Ardi, Eko, Me, and Mahe [Batukaras – Indonesia]