Perhaps when you hear the name ‘Blue Mosque’, your mind will automatically wander to Turkey, and you’re not wrong.

But the Blue Mosque that I’m going share in this post is not the one in Turkey, but it’s actually in Malaysia, and it becomes the state mosque of Shah Alam!

I knew nothing about this Blue Mosque until my friend from Malaysia, Khai, post about it in his blog.

I’m so lucky that Khai is so kind enough that he drove me and my friend, Kania, to visit the Blue Mosque in Shah Alam!

The visit was in the evening, so the light was definitely on! As this is actually the place of worship, so it’s still open until the evening time.

I have read and saw the photos from Khai’s blog post, but to see it in front of myself, I could see how big and grand the mosque is! The minarets are so tall that it became the tallest minarets in the world (now is the second tallest!), and the mosque itself is actually the second largest in South East Asia, after Istiqlal Mosque in Jakarta.

You can see the photos of the Blue Mosque during the day in my friend, Khai,’s blog here: The Blue Mosque of Shah Alam, Selangor . 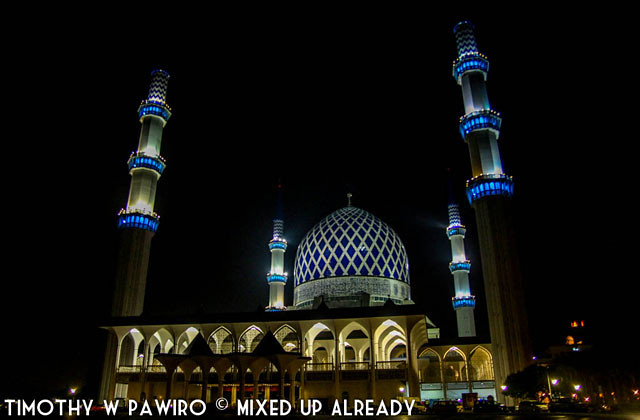