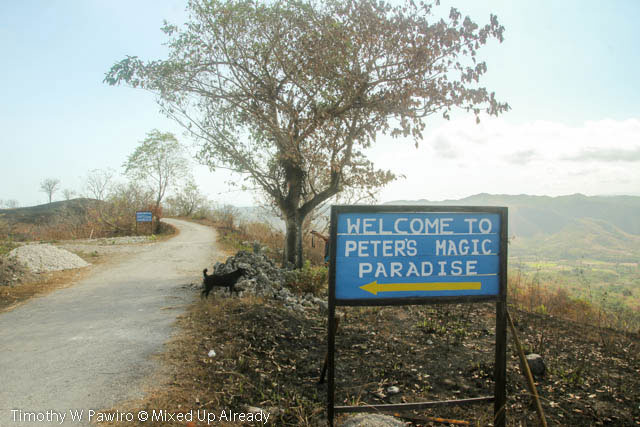 One of my and Sinthya’s missions (before Halim joined the trip) when we agreed to visit Tarimbang was to stay at one of the coolest accommodation in Tarimbang. It has a very unique name, i.e. Peter’s Magic Paradise (or Peter’s in short).

It turns out that Peter, who is the owner of the place, is also a magician, and he is even got a degree in Magic too!

After a 5-hour drive from Weetabula to Tarimbang; myself and Halim were very glad that we finally arrived at Peter’s. Unfortunately, Peter was in Bali at that time, so we did not get a chance to meet Peter in person. The staff there said that if Peter was around, he always loves to show his magic trick to the guests … So I guess we missed that! 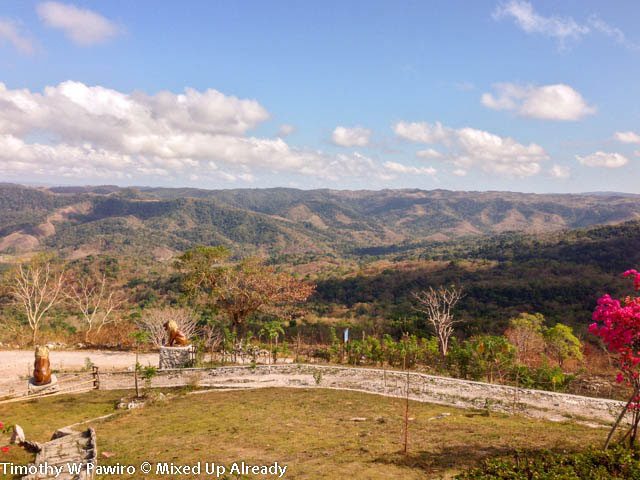 The view of the hills from Peter’s -@ Tarimbang [Sumba – Indonesia]

Anyway, we met his wife instead, Yosni, who was very helpful in providing the transport for us.

Yosni greeted and welcomed us to the place, and she invited us to join her at the main house. At first, I thought that the main house was one of the bungalows, but unfortunately it is not! Lol … The main house is actually where Yosni lives.

From the porch of the main house, we could see clearly the beautiful view of Tarimbang bay! This place is definitely has the best spot to view this wonderful gift from God! I know it was not located close to the beach, but seeing this view was just fantastic! Look at those two breaks of the waves, on the left and the right side. No wonder, Tarimbang also becomes the surfing destination. 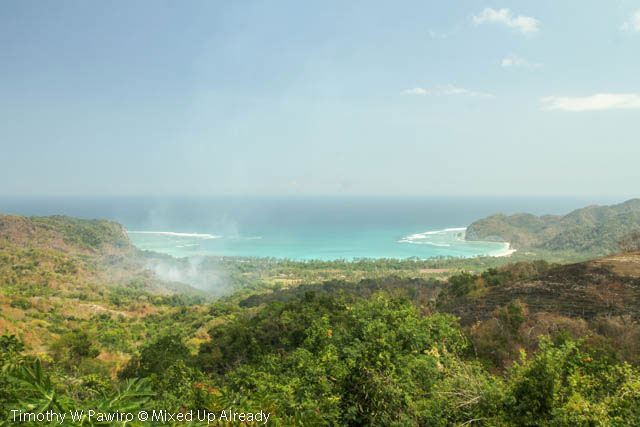 The view of Tarimbang bay from Peter’s [Sumba – Indonesia]

Peter’s actually consists of several bungalows, and luckily, our room was located at the front row, so we also got a direct view to Tarimbang bay. Love it!

The bungalow itself was only for the bedroom, and you can choose between the double bed room or the twin bed room. 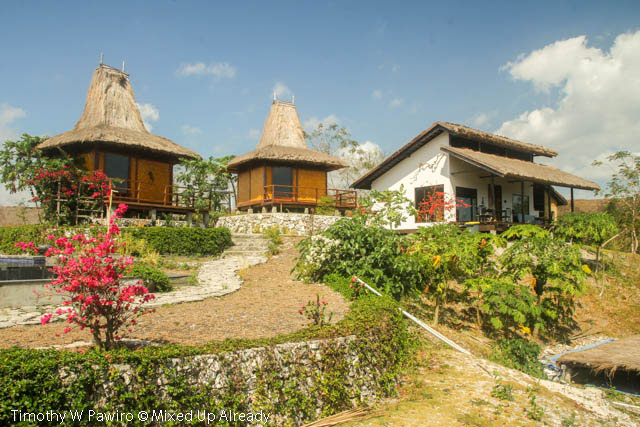 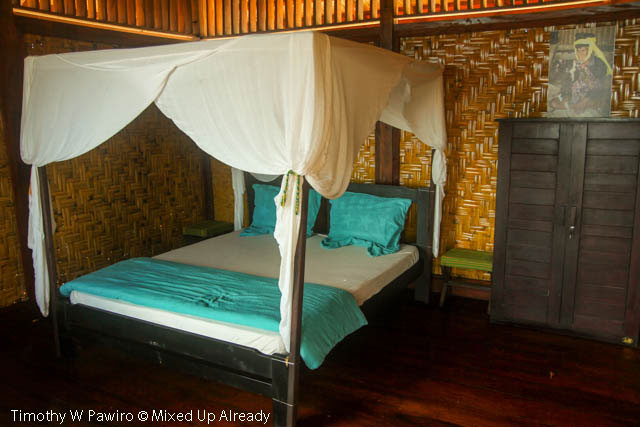 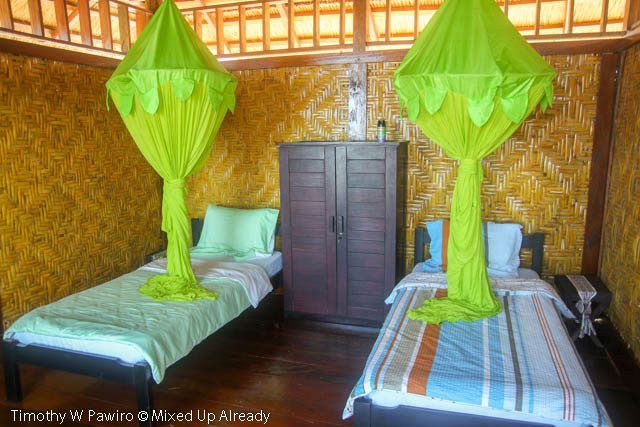 The room is quite simple. The bed is surrounded by the mosquito net, a wooden cupboard, a small table, and that was it. No need for an Air Conditioning at all, as there as enough holes for air circulation at the highest part of the wall. Do you see that wall was from bamboo matting? Yes, I think Peter’s wants to keep traditional elements, as you can see at the shape of the bungalow’s roof too! 😉

Then I was confused … If this bungalow was only for the bedroom … Then where was the bathroom?!?!

Apparently the bathroom is located under the bungalow’s porch.

So I just walked down the stairs and … Voila! The bathroom … Wait … It was not a ‘room’, it was not even has a door! Lol. It’s an open-air bathroom, and believe me … You will have a really good view, while you are sitting on the toilet! Haha. 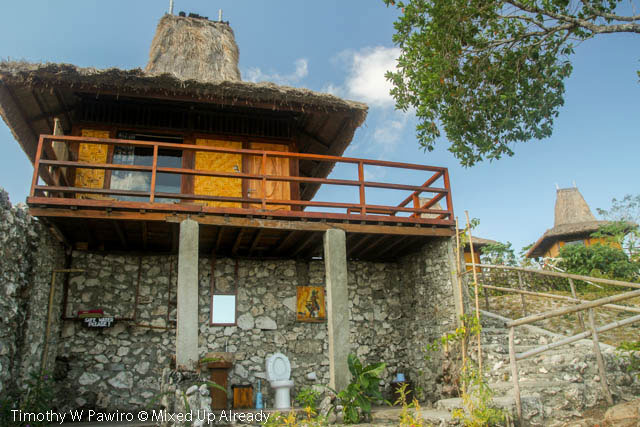 The bathroom is located below the bungalow! – Peter’s @ Tarimbang [Sumba – Indonesia] 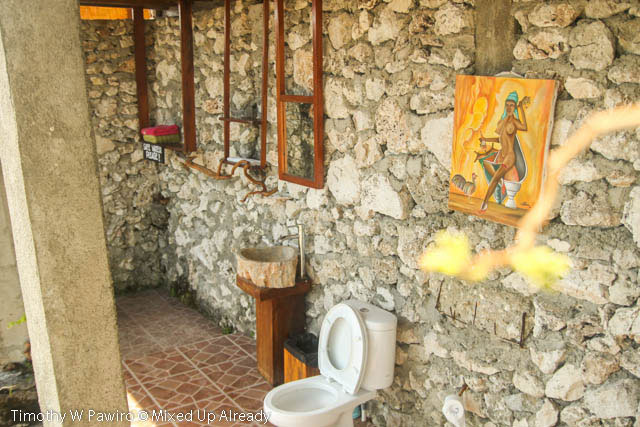 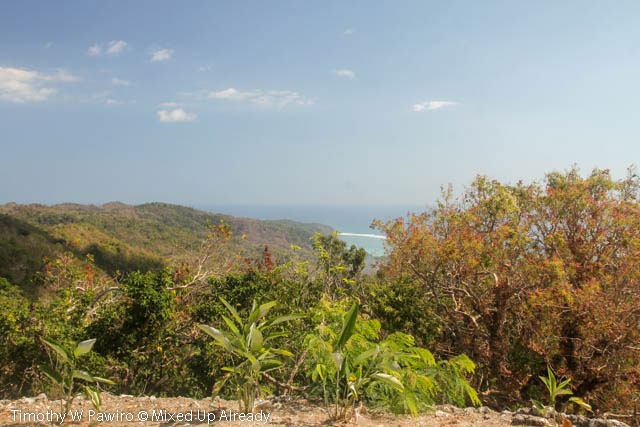 Well … this is the view that you will get when you are at the bathroom of Peter’s @ Tarimbang! Lol [Sumba – Indonesia]

I do really love the bathroom … Very simple with very interesting paintings, and the shower itself was using part of the bamboo.

Staying at Peter’s means that it is an escape from your routine. Why I said that? There were two reasons.

First was the phone signal. It was really hard to get a phone signal in Peter’s. Do not even think about 3G; searching for GPRS signal was already hard. Actually Yosni has pointed out some of the spots where I could get a good signal, but unfortunately I still could not find it. So on the second day, while Halim and I were waiting for Sinthya’s arrival; we walked to a hill that is located not far from Peter’s just to get the signal! Yes, we walked and climbed a hill to get the phone signal! Lol … Well … It was a good exercise too! *excuse*

The place was so peaceful at night. I was seating at the porch with Halim, and had a small chat while enjoying the cricket sound lol. The light from the moon was really helpful to ‘bright’ the night. Sadly, I did not have a good lense to take the photo of the moon. 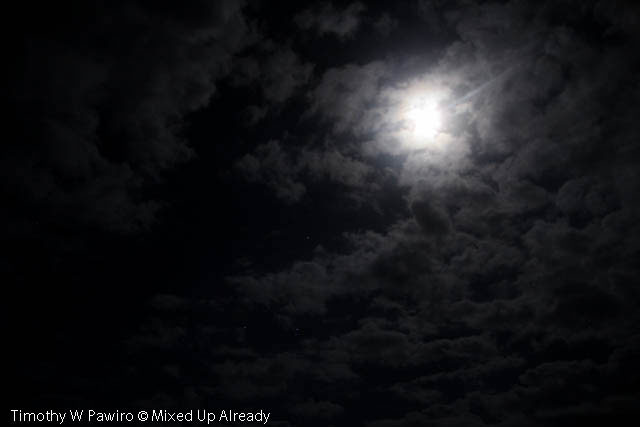 Peter’s also has a swimming pool at the centre of the complex. The water looks really blue! This swimming pool became the favourite photo shooting spot for Sinthya lol. It did actually look really good, as the background is the Tarimbang bay. 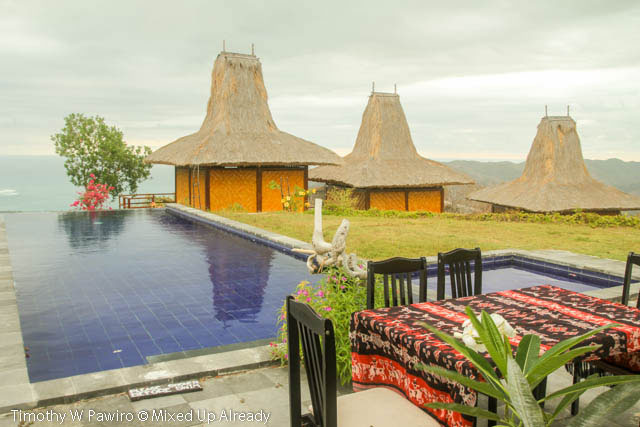 Anyway … There were two dining places. The first one was the one besides the swimming pool, and the other one was at the communal room. The communal room is a very interesting room, as there were many photos, including the wedding photo of Peter and Yosni, and also some paintings. As we did not see Peter in person, so the staff there played a video of Peter visiting some areas in Indonesia, where he performed the magic to the local people there. 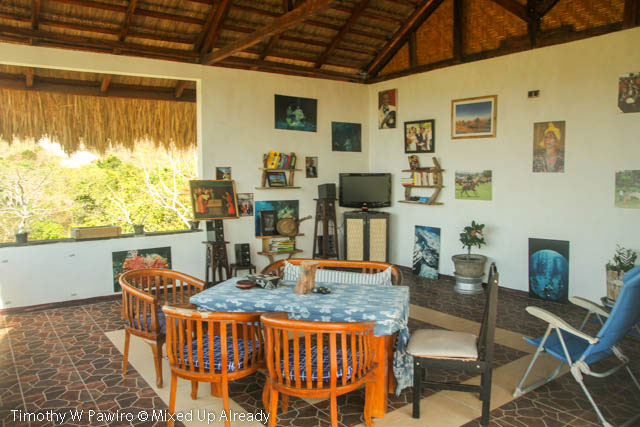 I think two nights stay at Peter’s Magic Paradise were not enough for me, as it took for about 5 hours drive or more. Although it was a short stay, but it was indeed a lovely stay!

It seems that Sinthya did not want to go home! – Peter’s @ Tarimbang [Sumba – Indonesia]

Book a room at Peter’s Magic Paradise via Agoda from here.