It was Friday night when myself and friends gathered in Padma Hotel, Bandung to have dinner in one of its thematic dinner.

Friday night means ‘Kampung Nelayan’ night in The Restaurant of Padma Hotel, Bandung. ‘Kampung Nelayan’ is a new concept in this restaurant besides their famous ‘Ribs night’ on Saturday night. It’s so famous that you need to book first as it’s usually full. If there’s a special occasion, such as Lebaran, they will also have a special concept in their restaurant to celebrate the special occasion. 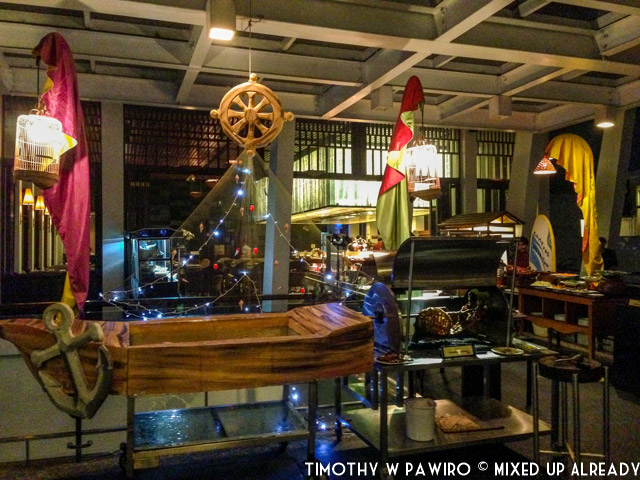 I thought I can only have seafood in ‘Kampung Nelayan’, but lucky for me – as I only like the ‘fish’, apparently there were a few more variations of food other than seafood there. And the best thing to have dinner here is, it’s a buffet style! I can take anything that I want and as much as I want! 🙂 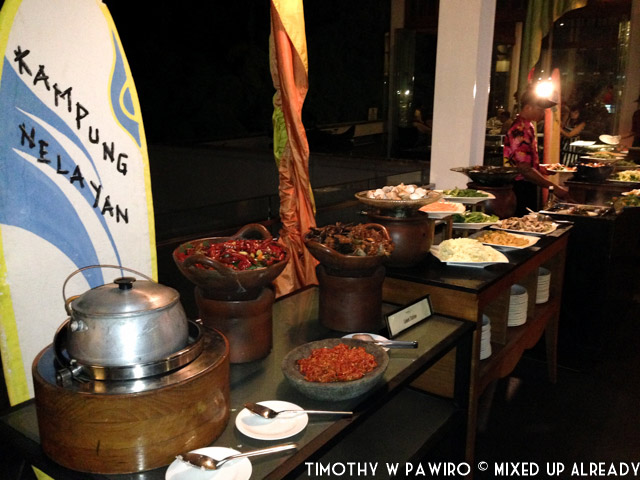 Various food [such as this ‘Nasi Liwet] in Kampung Nelayan at Padma Hotel [Bandung, Indonesia]

There are actually two areas of The Restaurant in Padma Hotel, Bandung. One is in the old building and the other one is in the new building. The one in the new building is more like a semi-open-air area, where they placed tables too outside of the indoor restaurant, which was a perfect place for us as the weather was quite cool at that night.

Both area housed a different style of food. The one in the ‘old building’ has the regular buffet style food, something like fried rice, etc. In this area, you can also have your favourite pasta, which I sadly didn’t take 🙁 . This area looks more like a restaurant – indoor – style, with an open kitchen. I think it’s also a good choice if you don’t like cool weather [well it will get much colder in the evening]. 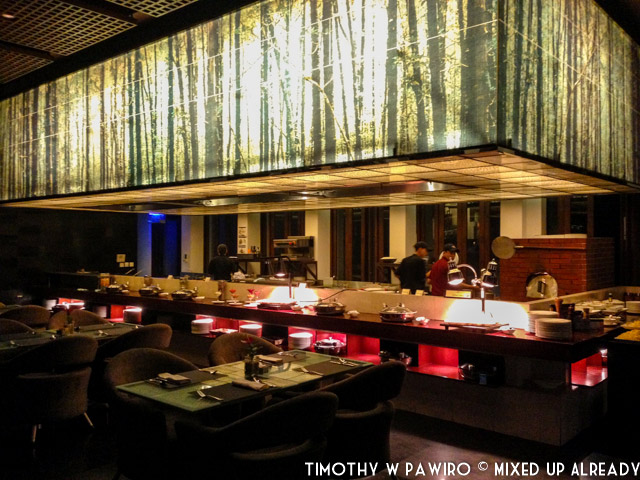 The restaurant in the ‘old building’ area at Padma Hotel [Bandung, Indonesia] 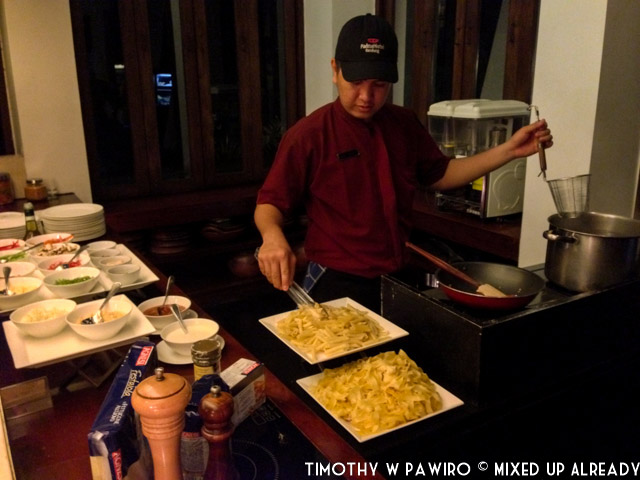 The more interesting area is actually at the ‘bridge’. This area connects the area in the old and in the new building. And not just that. This area has many food stalls that serve various delicious and interesting and yummy food. First, my favourite, is the ‘kambing guling’. The meat is tender and it became more delicious when I eat it with the chili soy sauce! Hmm … Love it!

Well … Not a good picture of the ‘Before’ part, but you got the point that people love ‘Kambing Guling’! – at Padma Hotel [Bandung, Indonesia] 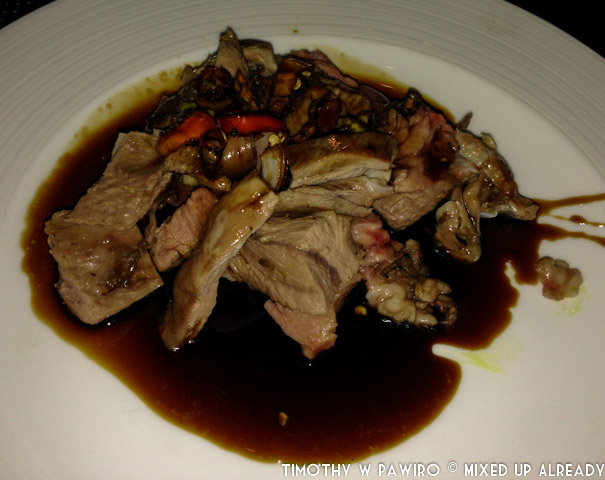 People who knows me, will know that I don’t eat fruit [don’t ask me why haha], but I do love vegetables! That’s why when I see that there’s a ‘wok station’ where we can choose vegetables, or other seafood [such as crab] to be cooked by the chef in the ‘wok station, I immediately stopped and quickly picked any vegetables and tofu that I like [I just grabbed any vegetables without knowing whether it’s a good match or not lol!]. My first thought that it will be just like a regular mix-vegetable dish, but I was completely wrong! It was so delicious … Well the sauce that makes the dish becomes more delicious!! Dinda, from Padma Hotel, told me that they are using the ‘Singapore sauce’ to cook this. Yummy yummy … I even finished the sauce until the last drip! 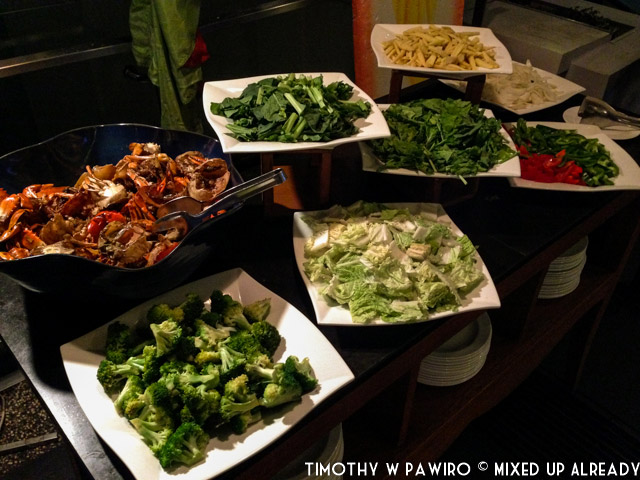 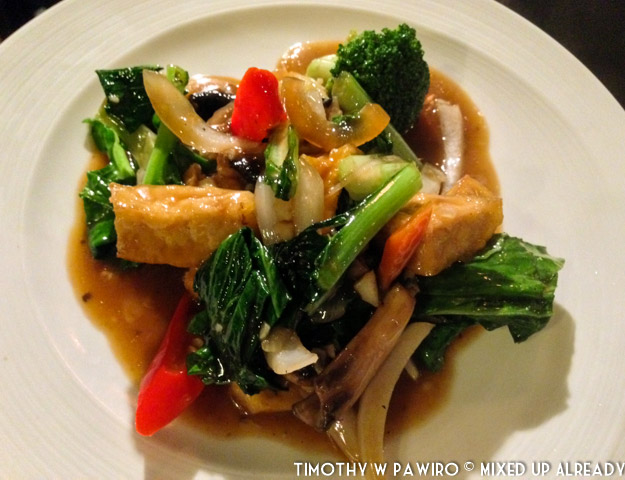 It does look like a simple mix of vegetables dish, but the sauce elevates the taste of it! Yummy ~~ at Padma Hotel [Bandung, Indonesia]

This ‘wok station’ is surely the food stall that you shouldn’t miss!! 😉

So if you are already stuffed with plenty of food, be sure to keep some space in your tummy for the desserts. A range of cakes, bread, and ice cream has awaited you in the area of the new building. All the canapes look like a light dessert, so I took five of those cute and sweet canapes and put them on my plate. I was totally wrong! One cute cake was actually quite ‘heavy’, especially the one with dark chocolate! I needed to stop after I ate 3 of that small cakes lol. My favourite is the one in the middle … It’s called Jelly Tofu Pudding. 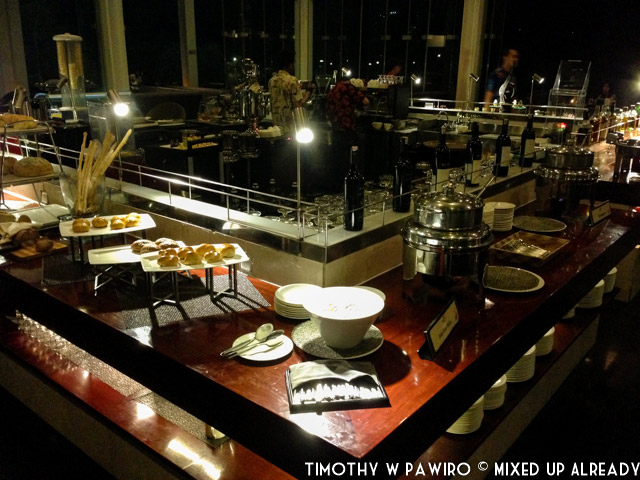 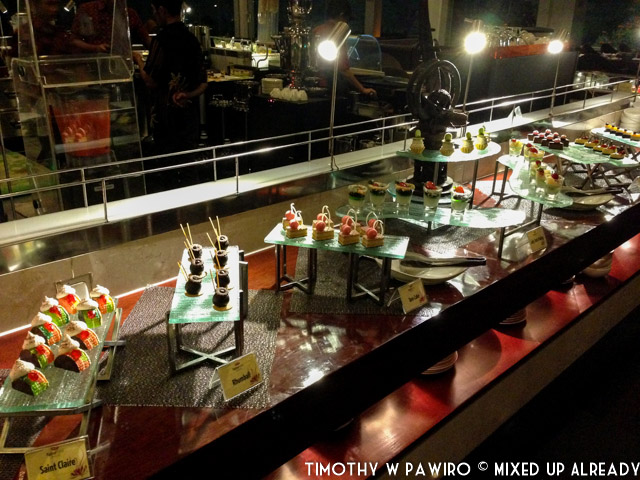 Lots of canapes to grab at Padma Hotel [Bandung, Indonesia] 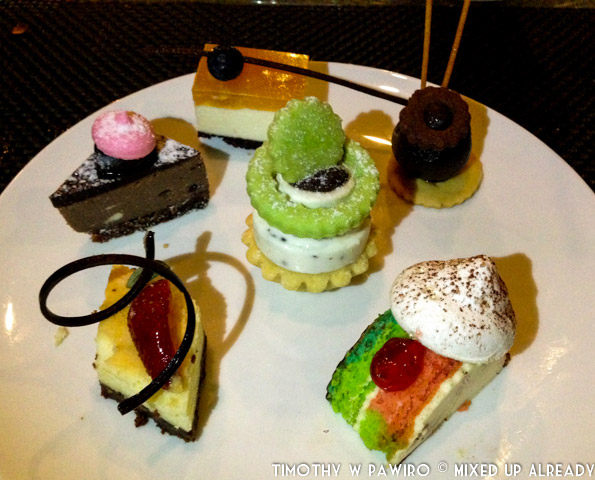 Six canapes for me … And the middle one [Jelly Tofu Pudding] is my favourite! ~~ at Padma Hotel [Bandung, Indonesia]

Don’t forget to try their home made ice cream too! 😉

Dinda told us that the visitors in this restaurant are not merely from Padma Hotel guest, but there are plenty of guests that come from outside of the hotels – even the guest from other hotels comes to this restaurant just to eat in this restaurant. It’s actually not surprising that people will come to this place just to eat as they know that Padma Hotel, that has just received the first spot in TripAdvisor from 151 hotels in Bandung, will serve high quality food! 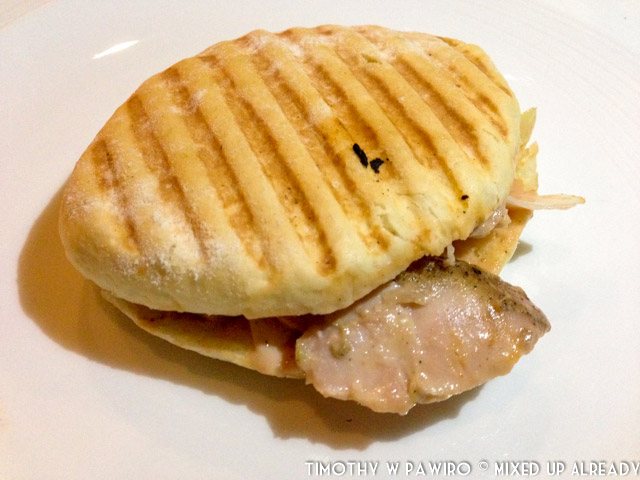 The other thing that attract the visitors to this hotel is the location. You will feel better if you stay in Padma Hotel, but even if you just eat in this restaurant, just like myself and my friends, I still can feel, that being in Padma Hotel, is like being in other cities [it’s like a quick escape from the city!]. The hotel is surrounded by plenty of trees, and during the evening, I could see a think layer of fog in the trees. I think the scenery will be more beautiful to be enjoyed during the day.

I only used my iPhone camera to take the photos during this evening, so I couldn’t capture a very good photos of the restaurant and also the surrounding of the hotel. So hopefully I can bring my camera in my next visit here! 😉

A great thanks to Dinda from Padma Hotel who invited me during a great hang out at The Restaurant with other friends: Adam & Susan from PergiDulu, Sharon Loh, Eko from Dlajah, and Ardi!

A great night out at Padma Hotel with Sharon Loh, Adam and Susan from PergiDulu, Ardi, Eko from Dlajah, Mang Eja, and Dinda from Padma! [Photo credit: Sharon Loh]

« Bandung … Where there are plenty of nice food and cafe