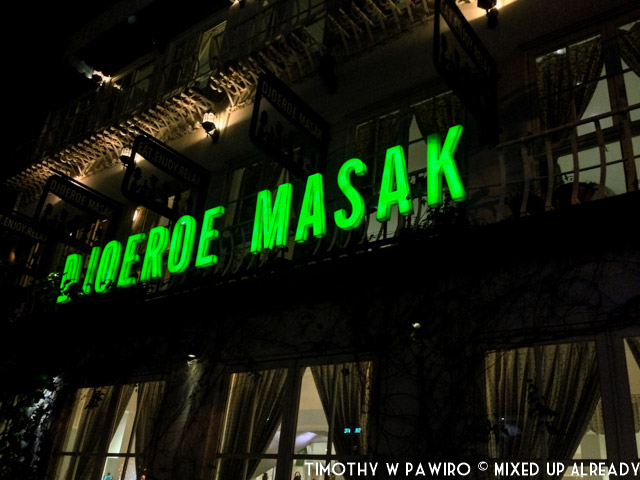 I was lucky to be one of the bloggers that was invited by Djoeroe Masak restaurant in Bandung. This was my first time to be invited by a restaurant – as I am not a full-time food blogger and I usually will always say that the food is either ‘enak’ [delicious] or ‘tidak enak’ [not delicious] with no further description of the taste and the display of the food. So I told them that I will mostly talk about the restaurant itself, with little description of the food! Haha …

Well, that’s an easy thing to do with Djoeroe Masak. That’s because Djoeroe Masak has one of the most beautiful, lovely, and unique interior design. Apparently the restaurant was designed by the owner itself, Edward Forrer. You might know a brand of shoes with the same name – Edward Forrer. Well, that’s because those are the same name. So no wonder if the interior part of the restaurant looks meticulously beautiful, as I think, Forrer himself, will use the same meticulousness to design the shoes. 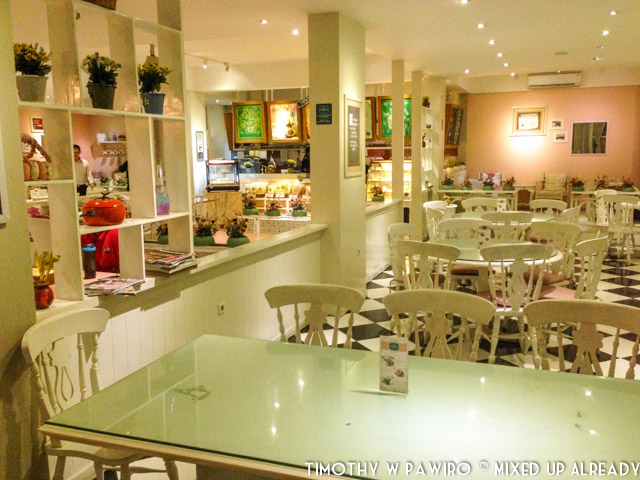 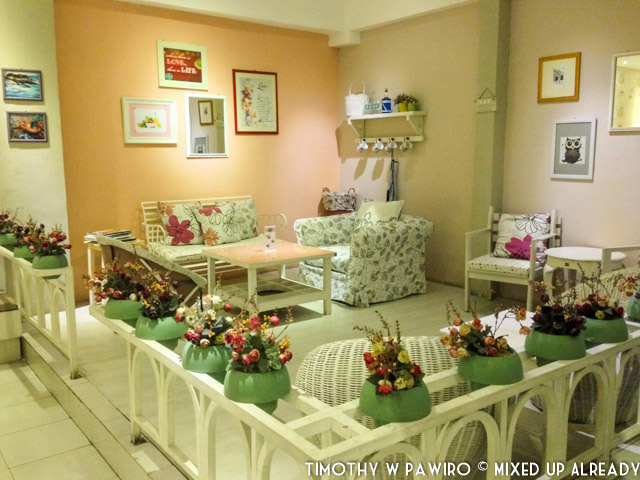 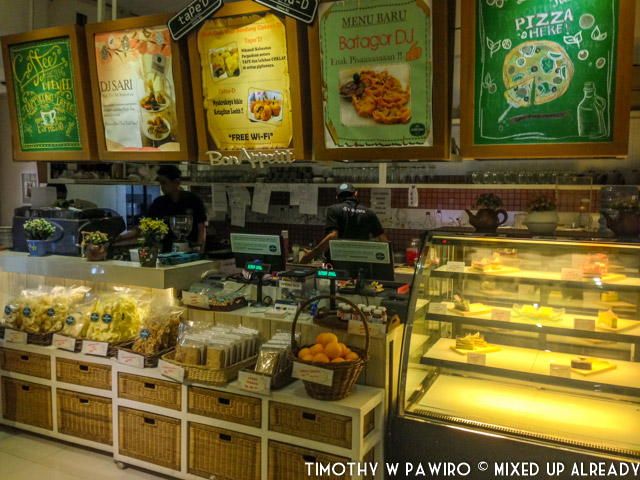 This was also the first time for me to visit this restaurant.

The restaurant is a three-story white building with the classic style for the exterior, and so the style for the interior is also using the classic and vintage style for the accessories and design. At first, I’m a bit confuse, why they build the restaurant so big until the third floor. Apparently they only use the third floor for special occasion, while the first and second floor is for daily use [there’s an additional meeting room (with an in-focus projector) on the second floor]. The restaurant manager also said that on the first floor they use the colour of white and green, while on the third floor more to white colour only. All of the floors can host around 115 – 125 people each. I think that is a lot of people for just one floor only – that’s why they have the package for wedding or some community event. You might wondering whether the parking space is enough for a lot of people. No worries … As they provide free valet parking service for the visitors if the ‘small’ parking lot in front of the restaurant is full 🙂 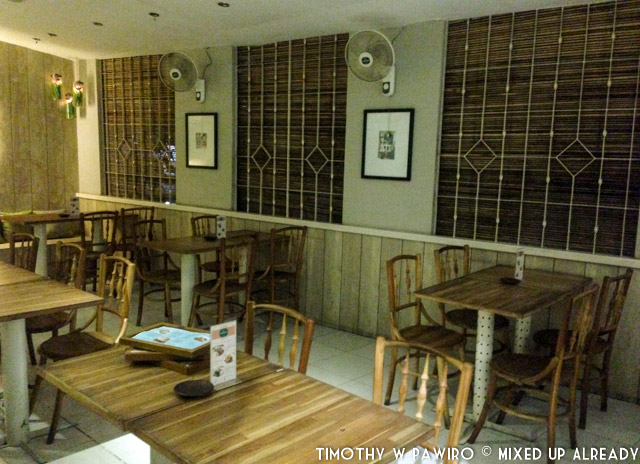 From the moment I stepped my feet on the restaurant, I couldn’t stop taking pictures of every corners of the restaurants. It’s like something that I shouldn’t miss, and the restaurant is so ‘instagrammable!’ haha. The area of each floors is quite big but the space doesn’t look empty at all, especially the area in the corner, they designed this area so it looks like a living room. I love the seats that they choose to be put in the restaurants, sometimes they used a couch, the seat that is used on the garden, the regular chair, and so on. I also really like the accessories that they hang on the wall, from the plates with the drawings that describe the 70s – 80s era, plus the posters [even they hang some aprons on the wall haha], and some flower pots on a small table besides the seats. Why they designed the restaurant to be like this? As they have the motto: feel like home but with the hotel star quality. The restaurant manager even said that many visitors stay a bit longer in the restaurant as they want to take as many photos [probably selfies too!] in this restaurant ;-). We also went to the second floor where they make sure that the concept is the same with the first floor … That is to have the ‘homey’ concept. 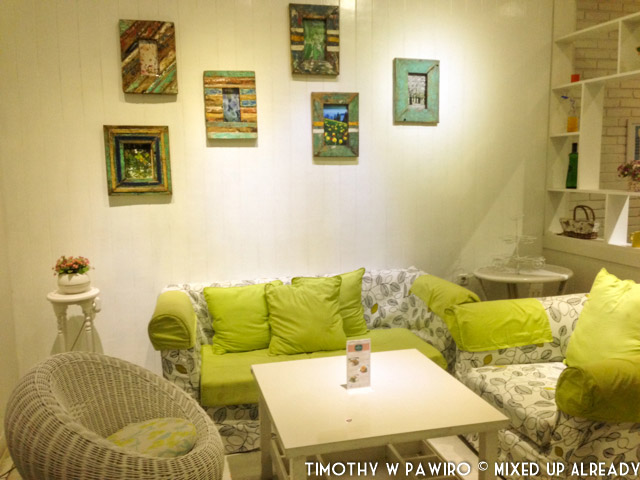 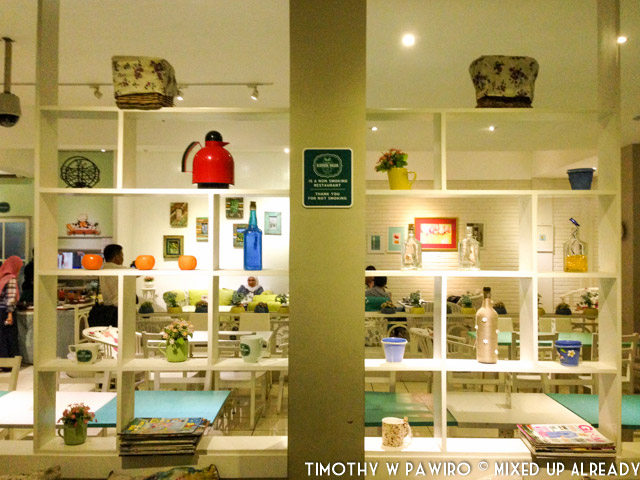 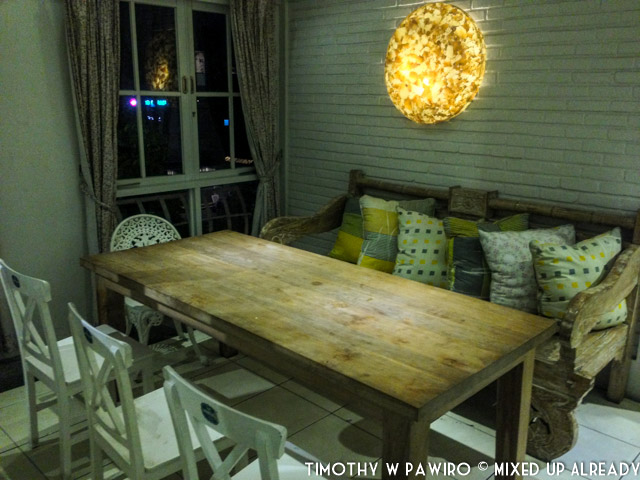 At first I think that the name ‘Djoeroe Masak’ implies to traditional Indonesian food only – as they are using the ‘old fashion spelling’ for the name. ‘oe’ pronounces as ‘u’ … So it has the same pronunciation with ‘Juru Masak.’ The restaurant manager then explained that the name is actually to tell people that the ‘Djoeroe Masak’ or I could say ‘the chef’ cook various food to give options to the visitors. They currently have around 60 western food plus 40 asian food … w00t! That’s a lot of food!

Well anyway, on that night, they have displayed several foods including the appetizers that I loooveee …  We got two appetizers that night: ‘Tapede’ and ‘Batagor a la Djoeroe Masak’. ‘Tapede’ is actually ‘tapai’ but they ‘glove’ the tapai inside the bread and the chocolate. It’s taste really good for an appetizer. One is not enough for me, so I grabbed another one! Haha. 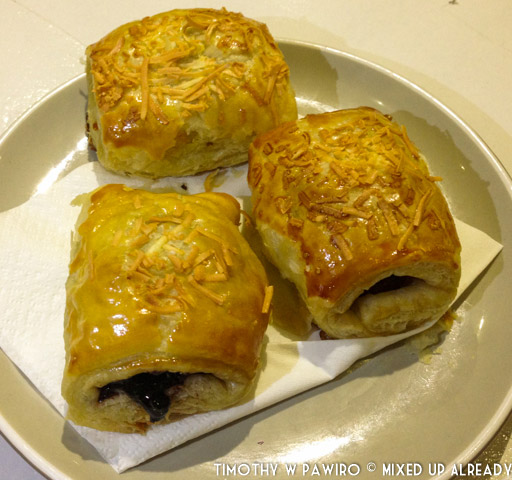 Tapede, bread with tapai and chocolate filling, can be found in Djoeroe Masak Restaurant [Bandung – Indonesia] 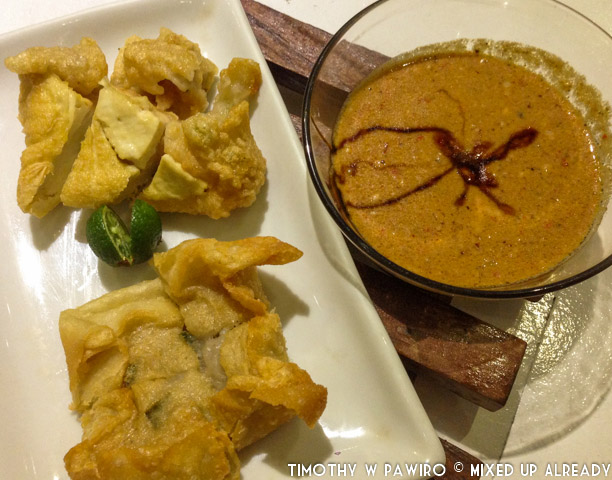 The ‘batagor’, which stands for ‘bakso’ [meatball] and ‘tahu’ [tofu] goreng [fried] is the next thing that I loved in here. Just squeeze the lime to add the flavor of the ‘batagor’ and dip it into the peanut sauce! Yum yumm …

There are several main course that were displayed for us, from Asian to Western food, such as the Fried Rice Matah, Salmon Rosemary Cream Sauce, Classic DJ’s Chicken Steak, Nasi Katumiri, Beef Thernidors, and Oxtail soup. My favourite would be the first three. Although Fried Rice Matah has seafood in it [I don’t like seafood, so I put it away haha], I still love it as, first – it’s a fried rice, and second – the sambal ‘Matah’ is delicious 🙂 [sambal ‘Matah’ is a raw Balinese sambal]. My next favourite would be Salmon Rosemary Cream Sauce … I always love the crispiness of the salmon skin and it didn’t smell fishy too. One of the unique food would be ‘Nasi Katumiri’. Usually a dish will only use one kind of rice, but this one is using three different kind of rice – white, red, and yellow rice! 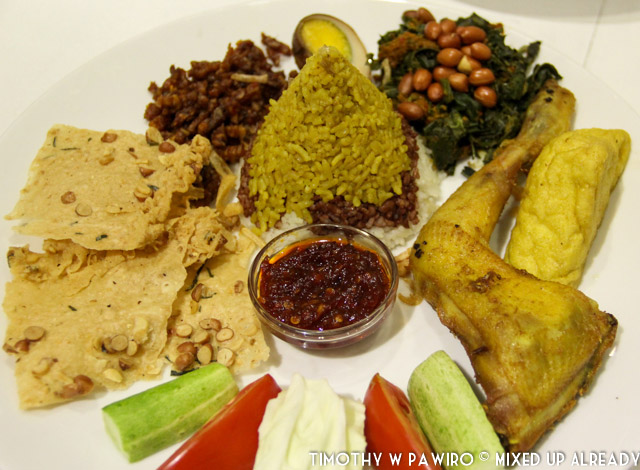 I really recommend this place if you are visiting Bandung – well first because you will fall in love with their interior design, second it has some varieties of food, from Asian to Western food, third – it has spaces if you want to hold some meeting or other events. You can contact them directly to get information of the packages that they have! 🙂

Group photos with other bloggers, the chefs, and the restaurant manager of Djoeroe Masak Restaurant [Bandung – Indonesia]