Home
Travel Stories
Asia
Is it a church or an Indian temple?
Prev Article Next Article

During my travel, I have visited some churches, including Catholic churches. The building of the churches usually have the regular shape of just like any other churches. When I heard that there’s a Catholic church where the architecture follows an Indian style  in Medan, I was intrigued to see it, and curious how they incorporate the Indian style into a church. So myself and my friends (Yudhi and Dewi) decided to visit this place.

The church is located outside of Medan, and I think it took us around 30 minutes to reach there. 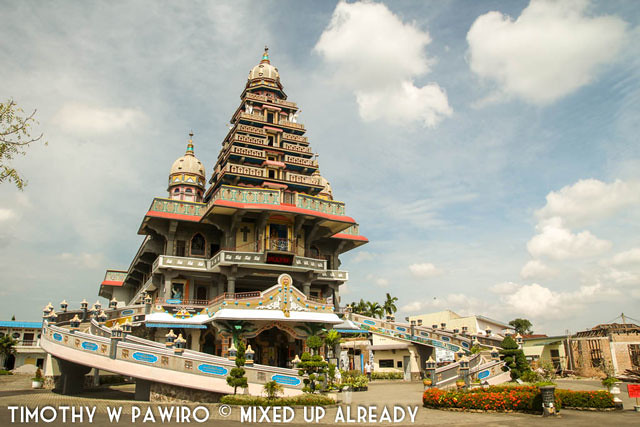 When I reached there, I was amazed with the architecture of the church. From afar, it doesn’t look like a Catholic church at all. I know the building isn’t wow like the golden pagoda in Lumbini, but this has a different wow!

There are meaning in each parts of the architecture of this building.

As I said earlier, no one would realize that this is actually a Catholic church. There is a purpose behind this. Father James, the leader of Annai Velangkanni – Medan, actually wants this place to be visited not only by the Catholic people but also by people who come from different background. Even the design of the building is actually a mixture from several religious style and culture.

Starting from the entrance gate of this place, you will find a miniature of Batak traditional house on top of it. Then if you walked to the community hall on the ground floor of the building, you would notice the style of the entrance (or window) looks like the style of a musholla (mosque). The three domes on top of the buildings also follow the style mosque dome. These three domes are actually a symbol of ‘The Holy Trinity’ in Christianity. Then the seven-stories architecture that becomes the tallest part of the building is actually the ‘Seven Skies’ where the seventh-sky represents the ‘Heaven’. The rest of the architecture you can guess easily that it’s from Hindu / Indian style 🙂 The Batak influence on the entrance gate of Marian Shrine of Annai Velangkanni (Medan, Indonesia) The shape of the entrance of this community hall in Annai Velangkanni is similar to the one in musholla / mosque (Medan, Indonesia)

Before you entered the church, you will notice that there are statues of Jesus and a woman outside of the church. You might recall the story that you heard in your Sunday school about Jesus who asked for a water from a Samaritan woman at the Jacob’s well when you look at this 🙂 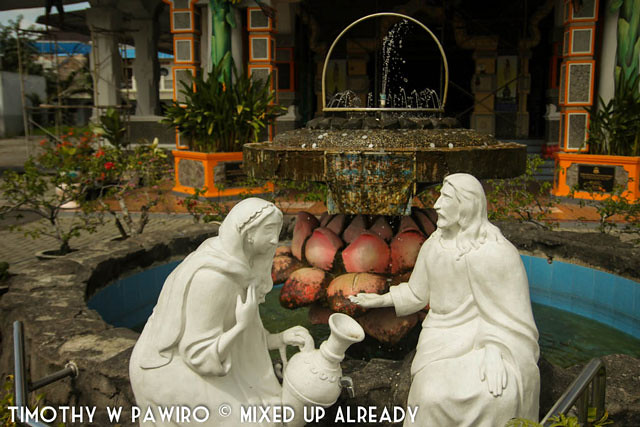 The statue of Jesus and the Samaritan woman beside the Jacob’s well at Annai Velangkanni (Medan, Indonesia) 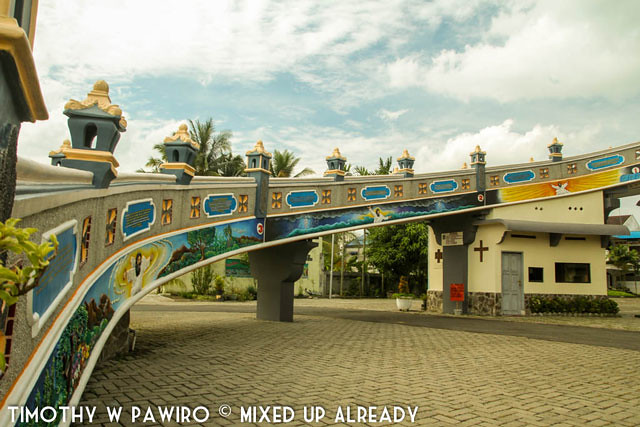 The semi circular passage at Annai Velangkanni with the seven days of creation carvings (Medan, Indonesia)

The church is at the second floor, and to enter it, I needed to walk on the semi-circular passage outside the church that connects the ground floor to the second story of the main building. Why they made the passage into a semi-circular shape? This is because it looks like open arms. Meaning that this place opens to all people. While I walked up to the second floor, I noticed that there are carvings on the side of the passage. Apparently the carving describes ‘the seven days of the creation’.

Inside the church, I found more arts on the ceiling of the church. At first I thought it’s a painting, but then the caretaker (I forgot his name!! Oops sorry) of the church explained that it’s actually a carving. It was carved by an Indian who lives in Medan and he’s a high school graduates. He carved beautifully until I thought it was a painting, and he didn’t only carve a small part of the ceiling, but most of the ceiling part. The carving is not an ordinary art, but it tells stories. Some of the carved ceiling told stories about the appearance of Mother Mary to the people. One of the appearances was to a lame boy. Mother Mary asked him for a milk, but he said that he’s paralyzed so he couldn’t take the bottle of milk. Then Mother Mary told him once again to do what she said, and miraculously the boy could walk. That’s why there’s another name for Annai Velangkanni, which is ‘Lady of Good Health’. 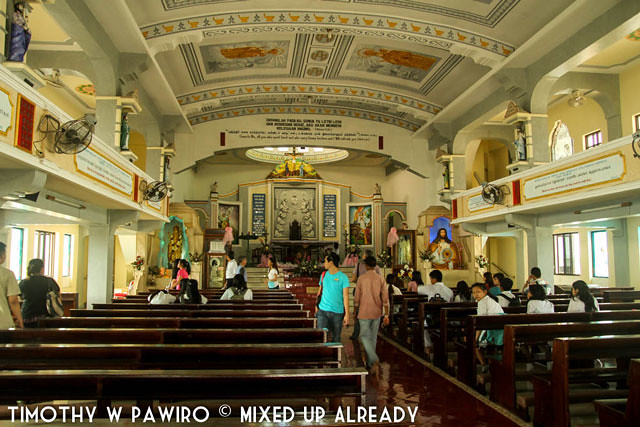 The beautiful carvings at the ceiling of the church on the second floor of Annai Velangkanni (Medan, Indonesia)

Two of the stories at the ceiling of Annai Velangkanni church (Medan, Indonesia)

The other stories at the carved ceiling was about the famous sailor from Portugal. Vasco de Gama. During the sail to India, suddenly he was hit by a storm. As he was afraid, he then prayed for the safety of this ship. Then Mother Mary appeared and accompanied him to India so he arrived safely in India. He then built a church in Velankanni as his gratitude to Mother Mary. The name of the church is Annai Velankanni or The Mother Mary of Velankanni. So this is where the name came from 🙂 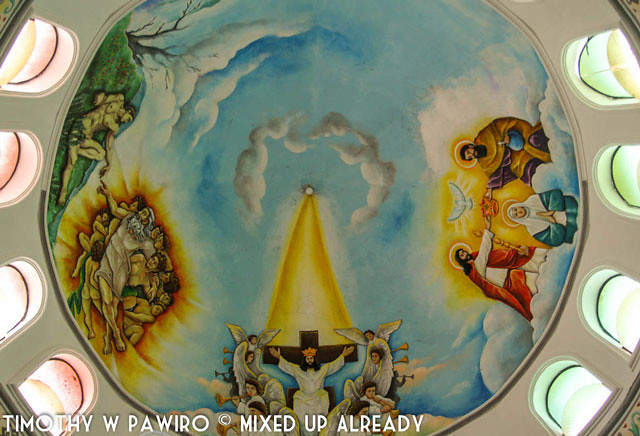 The painting at the ceiling above the altar of the Annai Velangkanni church (Medan, Indonesia)

The caretaker then told us that there were several miracles that have happened in this place.

During the construction of this building, Father James has collected money around IDR 10 Million to support the construction process. He hasn’t got a chance to put the money in the bank as he needed to attend a seminar in Jakarta, so he put his money in his room, and then wrapped it (plus a Bible and a hymn book) with a paper and a cloth.

When he returned to Medan, he found that his place was destroyed by fire. He was devastated thinking that the money could be destroyed with fire too. He then entered the place looking for anything that could be saved, miraculously he found the money and the bible and the hymn book. All are still intact. Not destroyed! Even the wrapper – the paper and the cloth, were destroyed by the fire!

Now the Bible and the hymn book are being displayed inside the church. 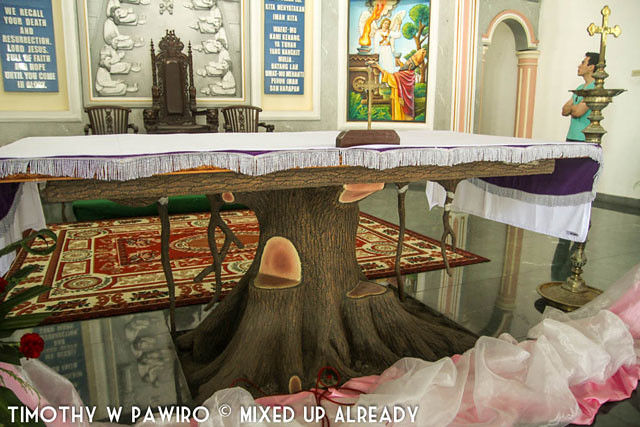 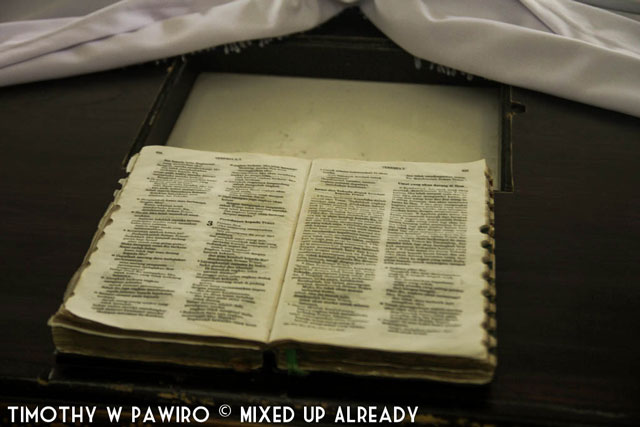 The bible that was recovered from the fire at Father James’ place is now being put on the altar of Annai Velangkanni church (Medan, Indonesia)

The second miracle was about the water that coming out from below the feet of Mother Mary inside the chapel. Father James thought that there’s a leak on a pipe or something and they have done many things to stop the water, but all the effort was failed. Then Father James heard a ‘whispering’ telling that he didn’t need to stop the water ‘let it flow, as it’s a Holy Water’. Curious with the ‘whispering’, then Father James checked the water in the laboratory and apparently the water is clean from germ, and safe to drink. For those who believe, there’s a healing power in the water.

It’s interesting to see another building in Medan where the design is a mixture of cultures and religious styles. This one surely a place that worth to visit! I really love how they pay attention to the detail of the architecture, especially the carvings at the ceiling of the church. 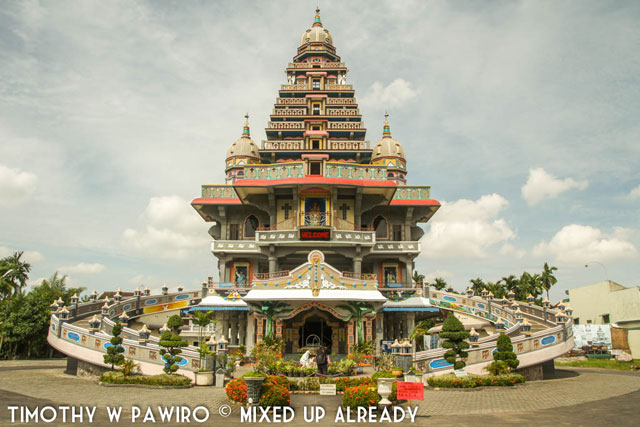