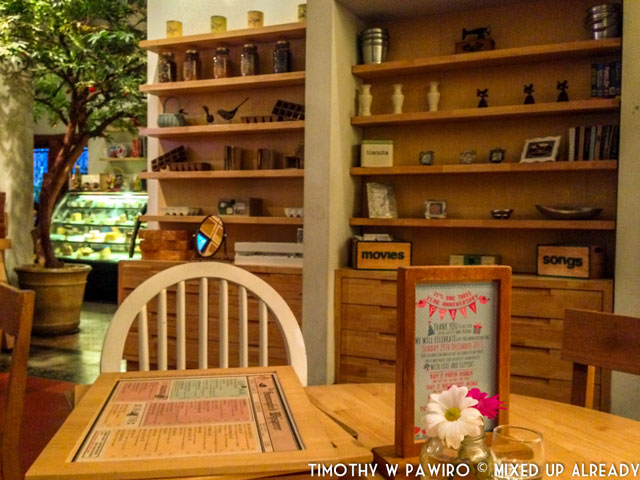 Inside of Hummingbird Eatery in Progo [Bandung – Indonesia]

I have just moved to Bandung around 3 months ago, and I am quite happy that I could find a lot of nice food, pretty cafe, and affordable restaurant in this town. Plus it’s very easy to commute here [I mean, the traffic is better in Jakarta – except weekend] so although I live in Eastern part of Bandung, I could go to the other side of Bandung with not much trouble. 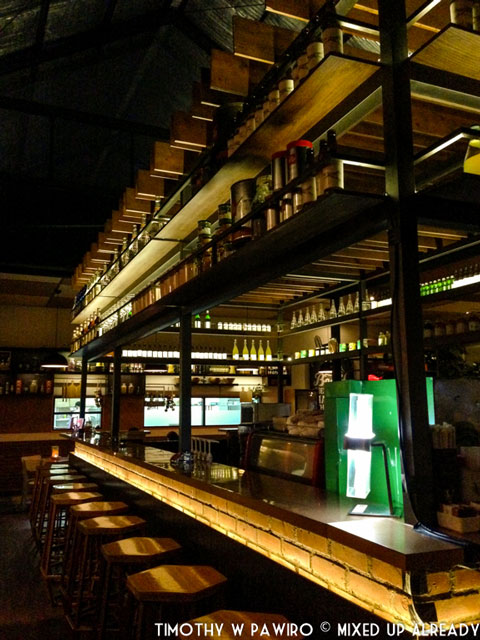 In Bandung you can find anything that you like, and there are plenty of choices that suit to your preference.

My preference is quite random and vary.

I could eat in a warung but I love to try the pretty cafes and nice restaurants. That’s why I like to try places that I have never tried before.

Hummingbird in Progo is one of the cafes that has a very nice interior design, plus the food is good too. This was the first cafe that I entered on my first visit in Progo. Love the ambiance and the food is quite good too. I didn’t really remember what food that I ate, but yes, their food is quite good. Did I say ‘quite good’ three times already? Lol. So it’s a combination of good food and good interiors.

If you go to Progo, you will see that there are actually quite a few more cafes and restaurants to explore in that street alone, such as Tokyo Connection until at the end of the road you could see Hartwood and then Two Cents not far from Hartwood. Both restaurants have interesting design, but for me personally, I would prefer Hartwood, that has more variation of foods and lovely design. Two Cents is okay too, and if you are a coffee lover, this is your place … They also serve food, but the variation is not much, and I think, looking at the menu, they try to serve fusion type of food.

After Progo, other area that you can explore is Dago. Dago is actually famous for its fashion things [Factory outlet, shoes], but it also has several restaurants and cafe, just like Verde Resto and Lounge. Every time I pass this place, it always crowded and it really makes me curious to visit this place. Finally I got the chance to try this place during dinner time in weekdays. Verde is actually like a lounge / restaurant with a bar at the centre of the restaurant. I tried its fried oxtail soup, and love the freshness and savory of the soup. Unfortunately I didn’t really like the sauce on the oxtail as it’s ‘overpower’ the soup, but over all I still like this oxtail soup. For dessert, if you like to try it in a different place, you could head to Caffe Bene which is quite close to Verde. I didn’t realize that this is originally from Korea, and specialize in dessert. I tried the cookies and cream waffle, and it’s a very very delicious dessert. Love the waffle taste and the ice cream too! 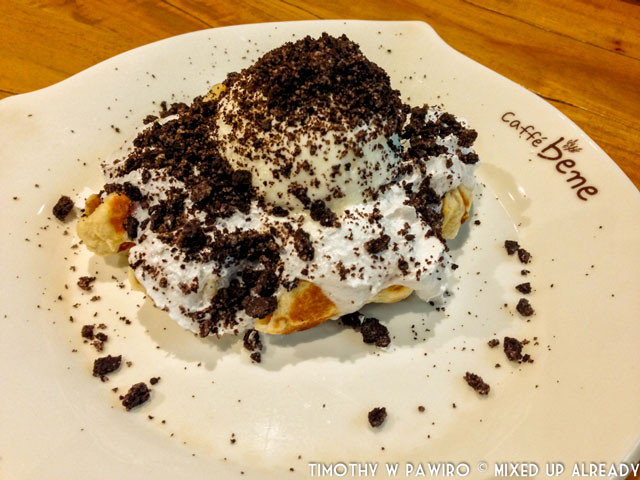 If you love to have steak, well, should I say that you can find steak in many places in Bandung, not to mention the Suis Butcher Steak House. There are quite plenty of steak variations where you could also find wagyu here. They usually will let you know which one is their favourite, by putting the picture of the ‘favourite steaks’ menu on the table. Too bad, I didn’t really look at the wagyu special menu on the table, where they discounted the price for a not-so-expensive 200 gram wagyu. Personally, I see this restaurant as ‘the old style’ restaurant, just by looking at the furniture that they use. I think perhaps it’s more like a semi Dutch restaurant? (CMIIW).

FYI, if you seat outside, you probably could smell the satay that is in the making from Jalan Anggrek. It will surely increase your appetite 😉 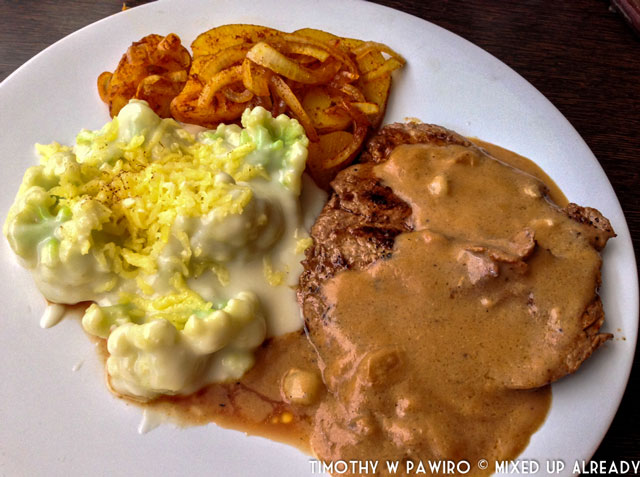 One of the steaks in Suis Butcher [Bandung – Indonesia]

Beside cafe and restaurant, there are plenty of ‘warung tenda’ or ‘warten’ in short (street food vendor that is using tent), and simple eating places in Bandung. Some of the warten has a really nice food and cheap too. Like just recently, I tasted a ‘baso konro’ in front of Padjajaran University – near Dipatiukur road. I didn’t know this warung before, I just passed the street and looked at the name of the warung that sounds interesting. Surprisingly the food is really nice. Usually, konro (a beef rib) is eaten with rice and put inside a soup, but this one, the konro is eaten with yamien noodle and two meatballs in a soup! – you can choose sweet or salty yamien noodle. For me, after I tried several yamien noodle in Bandung, this warung has the best yamien noodle so far. Delicious! 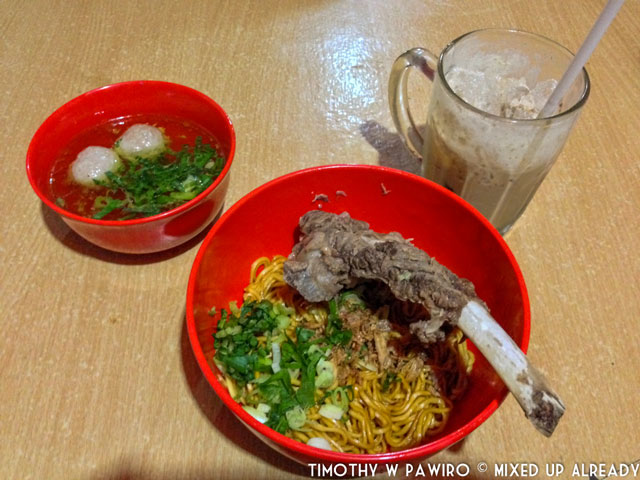 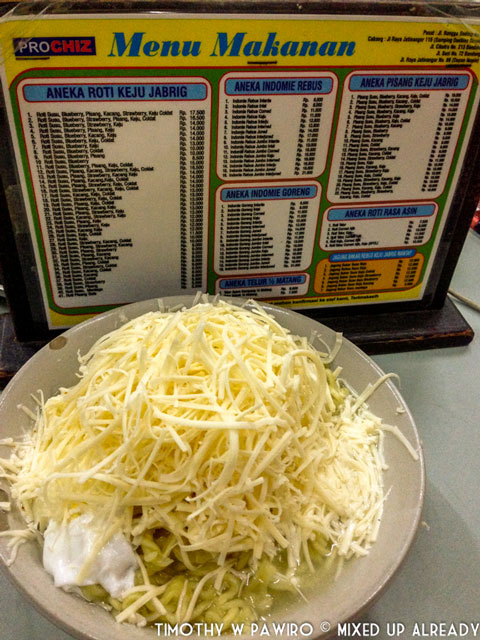 Indomie with cheese and egg in Madtari [Bandung – Indonesia]

Talking about noodle, perhaps you still remember Gia and Naomi in Selamat Pagi, Malam , where they were having a very yummy instant noodle with a lot of cheese! Well, actually you can find a lot of warung that sell this kind of food, but if you’re confused where to get it in Bandung, you can easily go to Madtari in Rangga Gading Road. They have a lot of variation of instant noodle there. Wait let me remember … Inter [Indomie – Telor (with egg)], Interju [Indomie – Telor – Keju (cheese)], Interjuned – is it? [Indomie – Telor – Keju – Kornet (corned beef)]. Haha …

In Bandung, there are quite few of places that put some of the food vendors into one place. Just like the one in Ciumbuleuit – KOLONI eatery, or CIKUTRA 189 in Cikutra area. Both are a really nice place to hang out with friends, but the one in Cikutra is smaller with less variation of food vendors, and also the parking lot is not that big, especially if you use the car. BUT, I’m not sure why, I really like to go to Cikutra 189. In this place, the favourite vendors are Nasi Goreng Mafia, and Urban Steak. Nasi Goreng Mafia has the most spicies fried rice that I ever tried. I could only manage to eat very little of the rice as it’s too spicy for me :-(, while the Urban Steak provides a nice steak with affordable price.

When you are in Bandung during the weekend, try to experience the Culinary Night – where there are a lot of food street vendors in one street. Most of the time, the culinary night will be held in Braga street – famous with its parking ticket payment machines 🙂 Many of my friends said that the street is crowded if you come around 8PM or during dinner time, but when I came there after 10PM, there were less people, but also lesser vendors as few has closed already.

If you want to try something different, let’s say, eating ‘tahu gejrot’ at the side of the road, well there are plenty of the sellers beside Gedung Asia Afrika. You can eat the food inside your car, or just sit at the side of road. Interesting right 😉 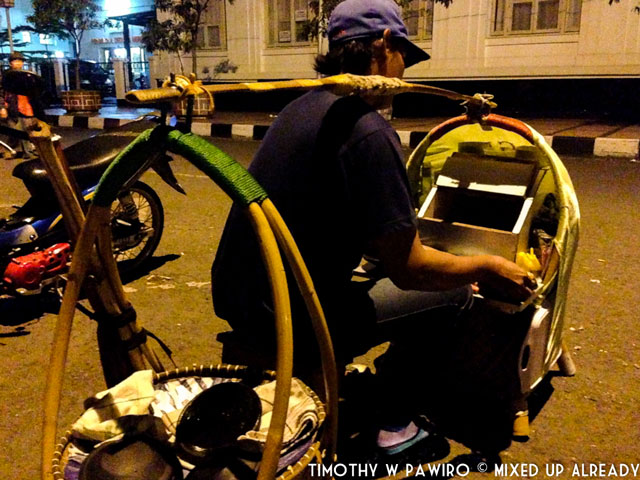 If you don’t really have time to go out to eat, especially if you couldn’t leave your work in the office, delivery service is always a good option for you.

Rather than going to a specific restaurant website, there is an app for you that can display several option of restaurants based on the city and area that you are located. This foodpanda app is already available in Appstore or Google Play, and very easy to use. Currently they are having several promotions in their website, from Ramadhan deals until Football Cup deals. The most important thing is the chance to win Samsung 55″ 3D SMART FULL HD LED TV for every order above IDR150,000. Love this!

PS: beside ordering the food from the phone app, you can also order it from the foodpanda website itself 😉

Well, there are plenty of eating places that I haven’t tried, so expect an update about food and cafe in Bandung in the future 😉 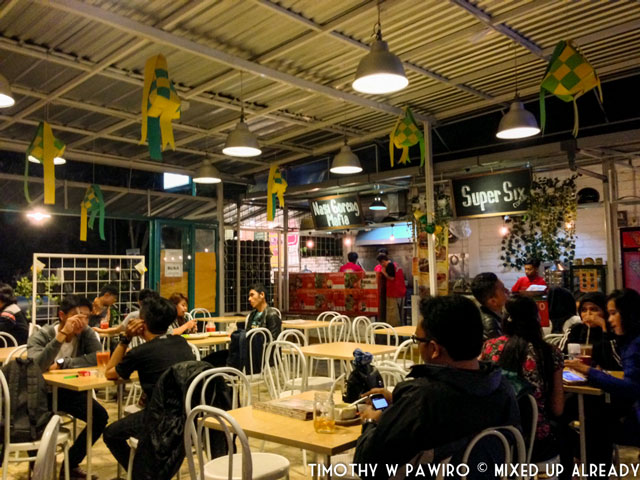 The situation inside Cikoetra 189 [Bandung – Indonesia] 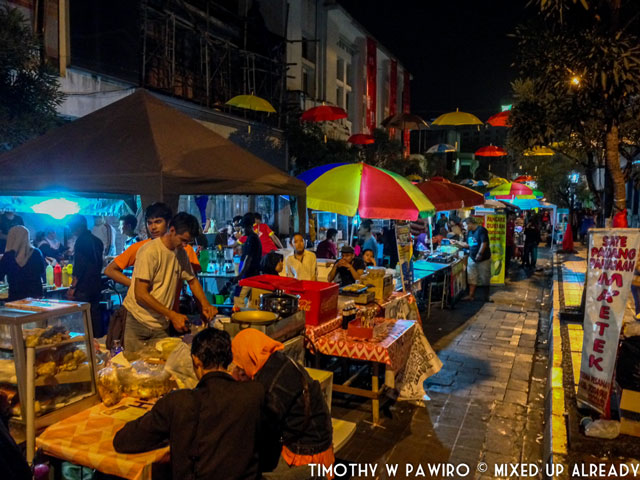